Why You Should Ditch Your Nonprofit’s Elevator Speech

Why You Should Ditch Your Nonprofit’s Elevator Speech

You know the premise.

You’re on an elevator with someone else. And in the course of a short ride, you explain your nonprofit’s work so well that you convince your listener to embrace your cause.

To steal a line from Aaron Sorkin, “What could possibly go wrong?” 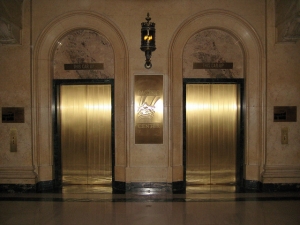 Well, for one thing, the conceit suggests an attentive audience. I.e., the other person shuts up and listens.

Two: the conceit supposes that the speaker – a board member, for instance – is articulate under pressure. Which runs pretty counter to the human experience: most of us, I suspect, are inarticulate under pressure. I certainly am. (Ah, the memories.) Public speaking has been called “America’s Leading Phobia.” So why do we want our board and staff to engage in an activity they fear and hate?

Three: the conceit posits an audience taking ever-increasing pleasure in what you’re saying.

On the ground floor, your supposed audience is neutral.
By the top floor, the person is jumping up and down with enthusiasm. Anything less would typically be considered a failed elevator speech.

… or maybe in an elevator, you’d get that kind of attention if you pointed a handgun ….

But from a prospective donor? Let’s not kid ourselves. Few jump up and down with joy.

Point #1: There never was an elevator.

Point #2: Nobody wants your speech.

I cannot tell you whether the “God particle” exists.

But I can tell you without a midge of doubt that you will never encounter donor prospects trapped with you inside an inescapable metal box.

It might, on the other hand, make a TV soap.

“We have 30 floors to go!” Vampira.org glowered. Her donor prey cowered, sinking ever lower against the elevator wall. “Now write the damn tax-deductible check,” whispered Vampira. An odor of rancid blood suddenly overwhelmed the elevator cab. “Or, by my fallen god, I will suck the last breath from your withering lips!”

Elevator speeches: Right for some, not all

Don’t get me wrong. Elevator speeches in their place ARE useful tools. If you’d like a serviceable definition, try Wikipedia. Want even more fun? Try the “elevator pitch builder,” offered by Harvard Business School. It’s a do-it-yourself “elevator pitch” mill. If you’re an entrepreneur trying to sell your product or service, Go There Now.

What I am saying is this: elevator speeches aren’t the right approach for early-stage donor prospects. During that sensitive early-stage period, your ears should be open.

And during that sensitive early-stage period, your lips should be shut, except to ask the occasional prompting question.

Every donor is created different, not equal. If you connect with them, it will be for their reasons, not yours. Speeches do move us on occasion, I’ll grant you. Just not on elevators.

When someone asks, “What does your organization do?” they’re actually asking a different question.

Let’s return to the premise.

You’re on an elevator. A stranger notices the logo on your canvas bag and says, “The XYZ organization. I’ve heard of that, I think. What is it exactly that you folks do?”

The correct answer is NOT your elevator speech. Of course, when someone asks, “What do you folks do?”, the urge to fill in that blank is nearly irresistible.

And yet you will gain more if you DO resist.

In order to find out the answer to that underlying question, you need to engage in a real conversation, a conversation that is as much about the person as it is about your organization.

An elevator speech is simply not built for that task.

An elevator speech is a one-way street. A conversation runs both ways.