Last week I had the opportunity to speak to a national webinar audience regarding this crucial, but often overlooked first step in any new fundraising software installation. Some attendees had clean data while a majority were mired in a mixed up data mess. Either way, it was delightful to see interest in the topic so high. Why is Proper Data Migration Overlooked?


The reasons vary from nonprofit organization to organization. It’s not unusual to see one of the following:

Obviously, each scenario can lead to problems with the data when they attempt to go live or the first time they attempt to generate an appeal or report. In many cases, the ensuing frustration leads to blaming the software for the deficiencies that arise.

Not every data migration goes bad. Some understand what is at stake, apply the proper resources and efforts, listen closely to the project manager from the new vendor and move through the process flawlessly.

How do they do it? 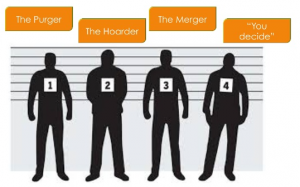 There are four common mindsets when approaching donor data migration:

Purgers usually fall into one of two categories.

The first type is already aware their databases are filled with a bunch of outdated, untrustworthy, inconsistent data that they can’t wait to get rid of.

Codes like “Martha’s contacts” (who’s Martha?) or “Masquerade Ball” (what year?) get thrown out like last year’s iPhones.

The second type are purgers who are in the dark. They didn’t handle their data with care, so they don’t know how bad, inconsistent and unreliable it is until the mapping process begins. As they go through the data spreadsheets, there are moments of awkward silence, followed by whispers of “what is that?” or “who did that?”

Either way, purgers usually leave the data mapping meetings feeling empowered and ready to begin anew. It makes for a great beginning in a new system.

These are the folks who want to keep every little thing exactly the way it is without realizing it is to their own detriment. They have lots of different codes that all mean the same thing – Event, Annual Event, Spring Event, Golf Outing all refer to their “Annual Spring Golf Event.” These users need constructive feedback to help them decide what to merge, purge, or keep.

Like purgers, mergers come into the process knowing they have a huge mess on their hands. They can’t get the reports they need, because the data lives in 15 different places. They used attributes to code their prospects, but others in the organization used the solicitor relationships. Some years, the Annual Gala was set up as a campaign, at other times it was set up as an appeal.

Whatever the case may be, these people understand they have all been doing things differently over the years, and they want it to come to an end. Immediately. They have made things difficult for themselves, and want to be sure the same doesn’t happen in the new system.

So, what does that mean? It’s merge time. These migrations are truly custom conversions, because people can get pretty creative when deciding where to store their data. This just goes to show that having too many options can be a very, very, very bad thing.

These folks are usually a combination of the above types in some manner. Like most of the ones above, they do not know the extent of the problem and what it will entail to fix. The previous history of the data is unknown, which makes fixing much more difficult. This group usually willing to defer to others in how to correct the issues.

By now all of you reading this post understand how important the proper focus on your data migration to your chosen new fundraising database is. In my opinion, it is every bit as important to evaluate the conversion processes and the staff involved from the various database vendors as it is evaluating their software.

You can usually tell if there is a strong commitment to making the data migration a success by careful planning and discussion or if the data will be slammed into the new database based upon how some organization used your old database nine years ago!

Yes, proper data migration is the key to a quick and wonderful start to using your new donor management system and achieving fundraising success.