It's Time to Stop Being Afraid of Asking Volunteers for Donations 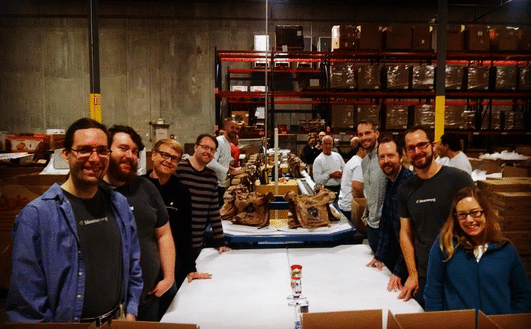 No one doubts how great volunteers are for their organization.

They maintain many of the same the qualities of your most-engaged donors.

And yet, some fundraisers still struggle with asking volunteers to contribute financially to the organization!

Okay. I get it. You have concerns and misconceptions about soliciting a volunteer for funds. Maybe you’re worried that…

The fear is that you might ruin a good thing, that they will stop volunteering if you ask them for money.

Here’s some really good news. Almost 80% of volunteers will donate (Volunteering in America), and volunteers are 10x as likely to give than a non-volunteer (Fidelity Charitable)!

You are leaving precious dollars on the table by not tapping into your gold mine of volunteers!

Asking a volunteer to invest financially for the first time is like asking a current donor to make an upgrade (you do this all the time!). They are some of your best prospects.

I’m not just saying this because it sounds logical. I’ve worked with thousands of volunteers in social services specifically and here’s what I’ve learned:

This requires you to know a little something about the volunteer, and be able to connect it to your organization’s story. It’s your job as a development officer or volunteer coordinator to make that story powerful and memorable. No one will be able to regurgitate most of your data and metrics after hearing it once, but they will remember a story that touches their heart. Once you’ve done that, you’ve primed the pump for a donation.

When I was working in social services, my director of development created a volunteer activity for a local CEO. We asked the CEO to build bookshelves for us in the cafeteria. The CEO’s son had some disabilities, so he was seldom allowed to volunteer anywhere. That wasn’t a problem for us, so we allowed the son to tag along.

Over the course of a couple hours, we were able to share part of our story with the CEO. Since the bookshelves were going in the cafeteria, it was easy to tell him how 8 out of 10 kids won’t get two meals a day if they weren’t in school. We told him how over 90% of our kids qualified for free or reduced lunch, and how buying books were the last thing on a parent’s mind. He might not remember those statistics, but he’ll remember our kids need help with food and literacy.

This simple, mundane volunteer activity allowed two of this CEO’s passions to come to fruition: spending quality time with his son while benefiting inner-city kids.

Here were some results from this volunteer activity:

So don’t be afraid to ask volunteers to make their first gift. I’m willing to bet that it will be the easiest ask you ever make.

What are some ways your organization has moved volunteers to donate for the first time? Let me know in the comments below!