Actually, Calling Donors To Thank Them Does Make Them More Likely To Give Again (And Give More)

In today’s digital-dominated world, personal touches like handwritten notes and phone calls can break through the noise.

Though mostly anecdotal, top fundraisers and consultants have espoused the power of such personal touches, particularly the use of the phone. We even have some data to back it up:

However, a late 2019 study on the efficacy of donor thank you phone calls threw a bucket of cold water on that conventional wisdom, concluding that “making thank-you calls made no difference at all.”

To the detriment of the sector, the headlines made the rounds on social media and in other online forums. But those who dug into the methodology of the study widely consider it to be problematic.

Among the flaws in concluding that thank you phone calls are ineffectual:

To the study authors’ credit, they did invite further testing. And they did correctly conclude that bad phone calls made so long after the gift are ineffectual.

But what about good phone calls made soon after the gift? Like, what we’ve always been taught?

We thought we’d see what impact those phone calls made within our customer base.

To do so, examined the stewardship habits of a random Bloomerang customer sample: 3,729 nonprofit organizations in the US and Canada, and their 1,915,939 donors. The organizations span a wide variety of sizes and cause types.

We looked at first-time donations made between 2012 and 2018, and what effect a phone call or multiple phone calls within 90 days of that first gift made on their retention rates, second gift size and second gift timing.

Here is what we found: Donors who did not receive a phone call within 90 days were retained about 33% of the time. This differs from the 20% average reported by the Fundraising Effectiveness Project due to our differing definitions of a retained first-time donor: theirs must give in the following year, while we looked at a second gift at any time after the first gift. This cohort of nonprofits achieved a 22.34% first-time retention rate using the FEP methodology, suggesting that Bloomerang customers are slightly better at retaining donors than the rest of the sector (and if you think a 2.34% difference is inconsequential, check out this blog post explaining what that can mean for increased revenue). 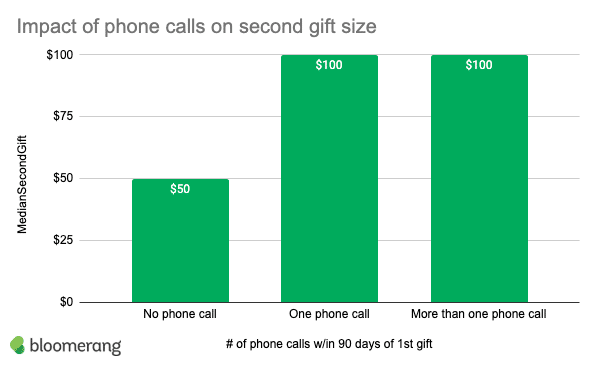 Not only do retention rates improve, but so does the size of the second gift; nearly doubling if at least one phone call is made. 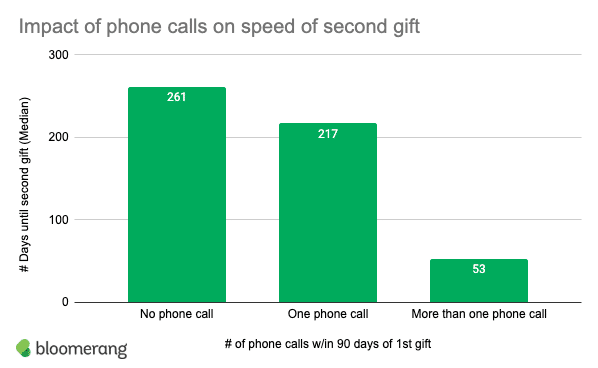 Not only is the second gift size larger, but the speed in which it is made is increased in instances where the donor is called at least once. Multiple calls resulted in a second gift being made only 53 days after the first!

Keep in mind that these phone calls were made within 90 days of the gift. Imagine the impact if they were made even faster, as prior research recommends.

Phone calls, as well as other personal touches, have also been effective during the COVID-19 crisis:

So don’t give up on the telephone just yet; it might be your secret weapon for good donor stewardship!