Election years are hard on everyone (especially this most recent cycle).

So it’s appropriate that the newest Millennial Impact Report is this year focused on how millennials’ cause engagement behaviors may change during an election year (having focused last year on the relationships and experiences between millennial employees), and how these changes may be influenced by important demographics such as gender, age, geographic location and race/ethnicity.

What does this have to do with nonprofits?

The author’s hypothesis was that millennials’ interests in social causes will change during the political season based on their individual political alignment, the final candidates chosen to represent those ideologies and the important causes associated with these candidates and ideologies.

Here’s what they found:

1. Millennials are most interested in education, health care and the economy.

A majority of respondents are most interested in education (29%), health care (25%) and the economy (24%). With student loan debt, as well as issues with health insurance and employment opportunities/wages weighing heavily on this group, it should be no surprise that those three causes dominated their interests.

Half of respondents (50%) identified as conservative, compared to 43 percent liberal and 7 percent neutral.

This may surprise many, as thoughts of the typical Sanders or Clinton supporter typically conjure up images of idealistic young people (pejoratively or not). 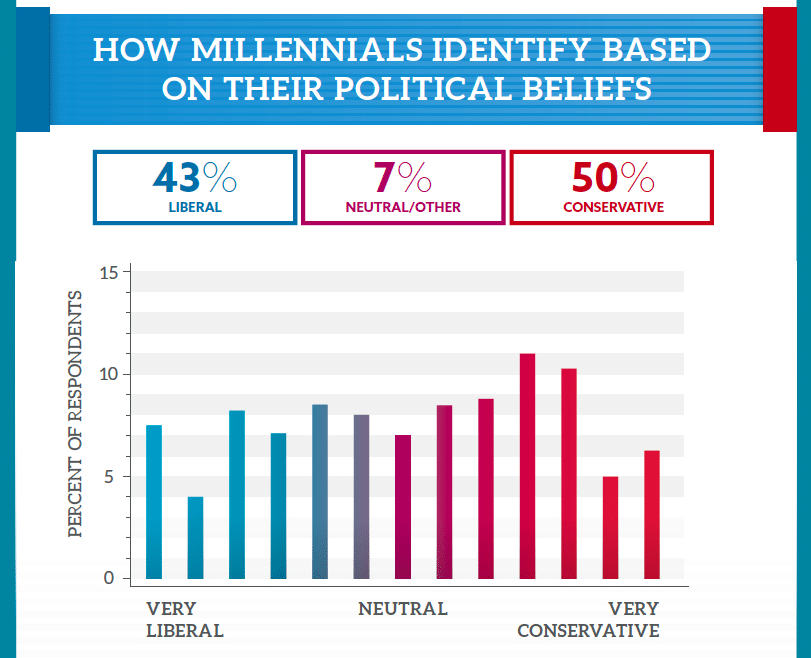 So if you’re a conservative-leaning organization, don’t assume that you can’t engage anyone under the age of 35.

3. Millennials only somewhat believe that they are activists.

Respondents were asked to rate on a scale of 0 percent to 100 percent how much they agree with the statement: “I am an activist (a person who behaves intentionally to bring about political or social change).”

The average response was just over neutral (54%), while the median response for this question was 60 percent, indicating respondents somewhat believe they are activists.

One could wonder if the fact that millennials are often characterized as “slacktivists” is having a negative, reinforcing impact – or if millennials are discouraged by their inability to participate in and create change.

4. Most millennials believe people like them can have an impact in the U.S.

Speaking of idealism, millennials do believe they can have an impact despite not considering themselves activists.

Combined, nearly all (90%) of millennials think people like them can have an impact in the U.S. to make it a better place to live.

This represents an opportunity for nonprofits to engage the age group in ways beyond just monetary contributions.

They’re willing and they’re ready to help, but don’t yet consider themselves true activists (per #3).

It will be interesting to see if these identifications persist outside of an election year. Be sure to download the full report here. In it you’ll find more interesting trends about millennial behavior and cause engagement.

Did anything from the report surprise you? Why or why not? Let me know in the comments below (no millennial bashing, please – we’re sensitive).

Chief Engagement Officer at Bloomerang
Steven Shattuck is Chief Engagement Officer at Bloomerang. A prolific writer and speaker, Steven is a contributor to "Fundraising Principles and Practice: Second Edition" and volunteers his time on the Project Work Group of the Fundraising Effectiveness Project, is an AFP Center for Fundraising Innovation (CFI) committee member, and sits on the faculty of the Institute for Charitable Giving. He is the author of Robots Make Bad Fundraisers - How Nonprofits Can Maintain the Heart in the Digital Age, published by Bold and Bright Media.