As a nonprofit fundraising professional, you’re likely always thinking of ways to encourage your donors to increase their donation amounts. Some donors upgrade their gifts without being asked, but most donors need some prompting. This is where suggested donations can play an important role in your fundraising strategy.

Offering suggested giving amounts can help donors choose the giving amount that works for them. In addition, donors usually end up giving even more when offered a choice of giving levels. In this guide, we’ll cover how to choose suggested donation amounts and leverage this strategy effectively throughout your fundraising campaigns and marketing outreach.

What are suggested donations?

Suggested donation amounts are the provided gift amount options that your organization offers to supporters. This makes it easier for your donors to choose how much to give to your nonprofit. Generally, these suggestions are presented to donors in several different ways:

These suggestions make the giving process easier as donors don’t need to determine a gift amount on their own.

How to choose suggested donation amounts

There are a number of ways to choose suggested giving amounts that will help your donors come to a decision that makes the most sense for them.

You can determine your suggested giving amounts using one or a combination of these strategies:

How to use gift arrays, ask strings, and default suggested donations

Most commonly, suggested giving amounts are featured on your organization’s donation page. They are the buttons supporters can choose with different gift options already highlighted.

So, when you offer giving options at various price points, should you go from high to low or low to high? Or should you pre-select a “default” or “anchor” amount? Several different studies provide insight into why how you present giving price options can influence donors to give more (or less) generously.

Research by NextAfter confirmed that “People see your array as more than just an array. They also see how you present the array as a point of communication from you, much like how body language communicates in real life.”

Their control used a rising suggested amount approach in a string of options, starting with $50 on the left and ending with $250 on the right. On mobile, amounts were stacked on top of each other with the lower amount first. Then they reversed this order for the test. Arranging options from high to low yielded a 15.7% decrease in numbers of donations and an 11.3% decrease in average gift size, resulting in a 25.2% decrease in revenue.

The takeaway is the high-to-low arrangement subtly communicates that smaller gifts are not welcome. People interpret the first option as what is desirable and acceptable. If your donor wants to give $50 and sees you appreciate $50 gifts as well as increasing gift sizes, they might just decide to upgrade and send you $75. But if they see anything under $50 is chopped liver to you, they may think adding the incremental $25 won’t much matter because all you really notice is the big gifts.

With online ask strings, you can set a default—this is the amount that will be automatically set if the user were to make no changes. Evidence indicates defaults do increase giving.

Don’t start too small. If someone wants to give $10, they can type it into the “other” blank.

Nick Ellinger of Donor Voice is a guru on this strategy. He suggests the following as a guideline:

The “amount” used varies. It may be the highest previous contribution, the most recent contribution, or a cumulative annual giving total. What you choose will depend on how your organization fundraises. For example, if someone gives you $100 on Giving Tuesday and $400 in response to your year-end appeal, you may want to use $500 (cumulative total) as a baseline for what you ask for next year. But if they give you a $25 tribute gift and a $1,000 annual gift, choosing $1,025 would be far too high for a baseline.

Another route, especially for new prospects, is to take a look at your average gift size (online and offline) and make that your smallest gift level. You can do this for different segments of your database as well. This means you’ll need different response cards and donation landing pages.

Your online giving platform should be able to customize gift options by suggesting donation amounts and/or defaults, setting custom gift strings targeted to different donor/prospect mailing segments, and arraying them on the page.

Your donation form should also remind your donor what their gift will accomplish. You can use your gift form to suggest donation amounts of varying sizes and describe how each gift size will help your cause. This aligns your appeal with tangible outcomes.

For instance, you might explain that a $50 donation can provide pencils, notebooks, and other supplies for local students who attend your after-school tutoring program, while a $500 donation can lead to the purchase of a new laptop for a student.

If you can find an impact that will spark empathy and compassion, donors will give more.

When you’re sending a direct mail appeal, one of the ways to establish an “anchor” amount instead of a button default is to circle an amount on the remit form or let folks know “most people give X. ” The latter triggers the persuasion principle of social proof. Research suggests that people tend to be followers who look to others to let them know what is expected. People tend to default to the norm.

The smaller the community within which you establish the norm, the more powerful your message. Try to allude to a particular community of like-minded folks to whom your donor relates, as in “most ACLU supporters give” or “most church members give” or “most families give.”

One study by Jen Shang and Rachel Croson informed callers to a public broadcasting pledge drive that a previous donor had given $75, $180, or $300. Citing a $300 donation increased renewing members’ donations by an average of 29%. When informed that someone gave a larger donation than their previous one, their gift increased by more than $12. When told that someone gave a smaller donation than their previous gift, their gift decreased by $24.

On the flip side, some studies show that self-selection can be just as impactful for increasing donation amounts as some suggested donation amount strategies.

So, rather than suggesting a specific amount, should you let the donor make their own choice? This can work in very specific scenarios, such as when you’re sending a request to a group of major donors who are already predisposed to give in higher amounts.

NextAfter conducted an A/B/C test with one of their nonprofit clients with a lower ask string vs. a higher ask string vs. simply letting donors choose to make “a generous gift.” Take a look at what the test looked like: 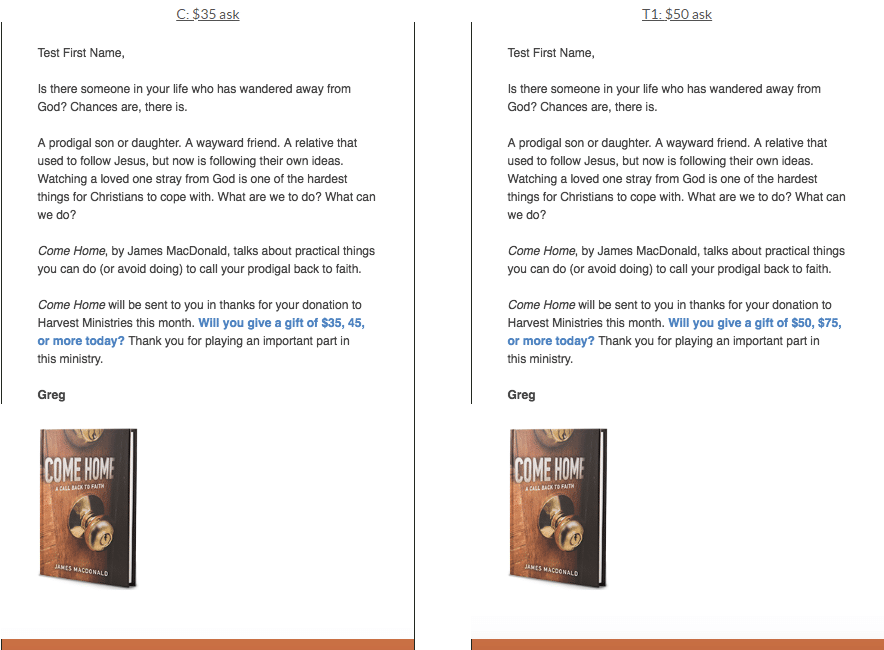 The email allowing donors to choose their own gift size produced a 43.1% increase in donor conversion and generated a higher average gift than the ask strings control. This shows that there are exceptions to everything, and you’ll only know what works for you if you run similar tests with your organization’s audience.

One thing to add is that, in this experiment, it’s possible the ask strings presented were both simply too low. As Nick Ellinger of Donor Voice and The Science of Ask Strings puts it: “The goal of setting ask string defaults is to guess as close as possible to the maximum amount that a person would be willing to give. When your guess is below that, you may leave money on the table; ask more and the models show you will potentially see a lower response rate. Thus, letting someone choose their own gift may help them pick the right gift for them.”

Pre-selecting monthly giving on your donation page can increase conversions of monthly donations by up to 35%. Another strategy is to present a pop-up box just as donors are about to submit their one-time gift that prompts them to consider upgrading to a recurring gift.

Many organizations fail to suggest stock gifts. Consequently, donors fail to consider this as a giving option. It turns out it’s a terrific upgrade strategy because gifts of stock can cost a donor less than a gift of cash. Here’s how it works:

Sometimes donors who consider giving a bit less (say a $750 gift) will upgrade when they realize the philanthropic power of their gift of stock.

As you can see, offering a variety of suggested donation amounts to donors helps them come to a decision more easily and can encourage them to increase their giving. This allows them to make an even greater impact on your mission. Use these giving suggestions throughout your email, direct mail, online, and in-person outreach for maximum impact.

Looking for more resources on how to optimize your outreach and fundraising strategies? Review these additional Bloomerang resources: