Like so many nonprofit organizations, Oregon Humane Society’s challenge was two-fold: communicate programming changes in light of new social distancing and sanitation measures, and communicate their financial need. As a humane society, the care and protection of the animals in their facility was of particular interest to their community. Despite not being in direct human services, Sara and the OHS team did not shy away from fundraising.

Monthly donors are particular important to OHS (as they should be). After broadly updating the entire community on changes at the facility, Sara and her team reached out to monthly donors first before beginning their appeal campaigns. Those appeals were also segmented, allowing contextualized asks for distinct groups of supporters. The results shattered expectations.

In Mid-March, OHS began communicating changes at their facility, as well as in-person event cancellations. Very early on, OHS got out in front of monthly donors with pure stewardship; thanking them for their past and ongoing support, and reminding them that they are the lifeblood of the organization. This “prime the pump” method prevented monthly donors from being alienated by future appeals. Sara and her team believe that this email made subsequent appeals more successful. 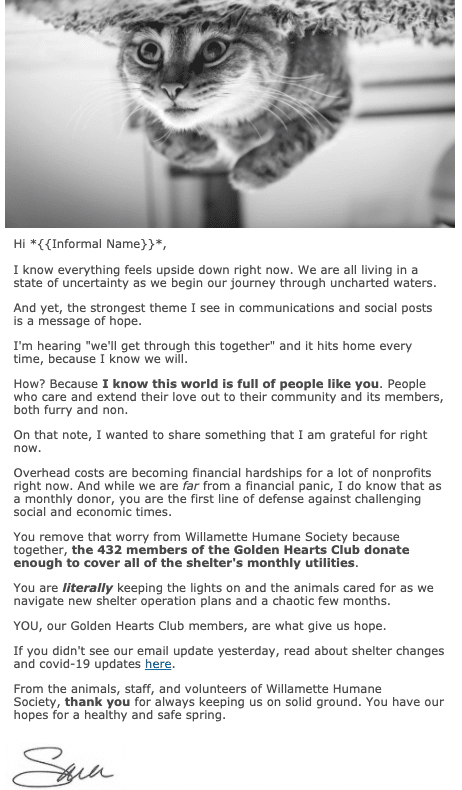 Sara and her team set up a variation of the same email to three distinct segments:

While the core of the message was similar across all three, each had a unique intro and call-to-action. For example, the monthly donor segment suggested sustainers increase their commitment.

Subject: Are you looking for a way to help? 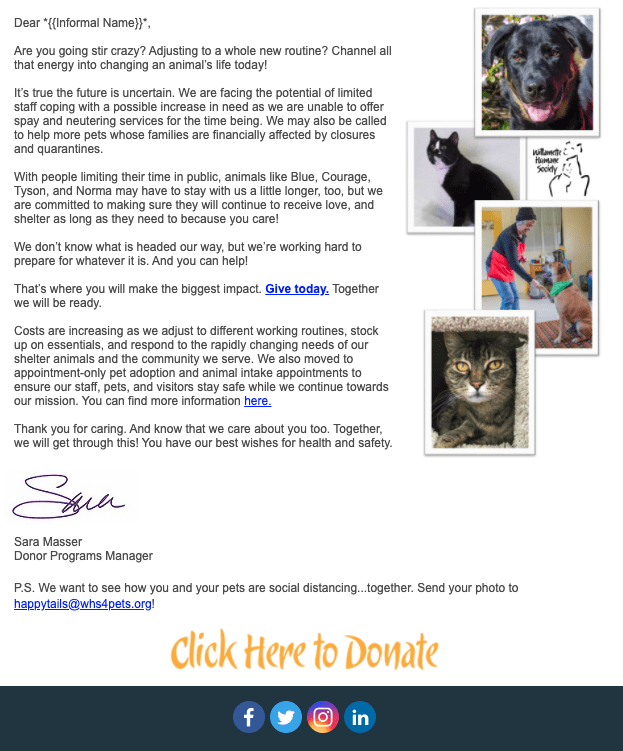 These three emails alone generated over $17,000, as well as several upgrades from existing monthly donors.

As the situation continued to evolve through late-March, OHS continued their updates. Each included multiple, specific calls-to-action for additional support.

Subject: How we can serve pets and people—together