Wabash College, my alma mater, is a liberal arts college in Indiana with around 900 students, and it hit the fundraising bulls-eye on April 30, 2014.  The college, which raises over $8 million annually, managed just shy of $500,000 in a single day during its 430 on 4/30 campaign. The campaign, which is also notable because it was the first time the college had a “day of giving,” set a modest goal of securing 430 donations, which, if met, would earn the college an additional $43,000 from a group of alumni 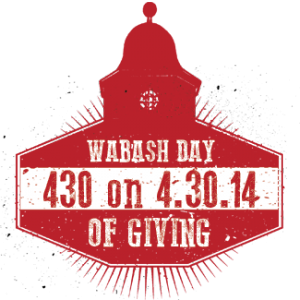 Needless to say, the college met its goal and then some.

But while the amount of money raised is impressive by itself, that’s not even half of the story. Let’s run through some additional noteworthy accomplishments Wabash achieved, and then we’ll examined what worked for the college and how fundraisers can achieve similar results with their organizations.

What Wabash Accomplished in 24hrs

Beyond fundraising statistics, though, the college created a sense of excitement and buzz through various social media and the alumni community that it really hadn’t ever experienced. I can attest, my inbox was buzzing with messages from my graduating class, my soccer alumni mailing list, and various Facebook notifications. As a donor, I typically make a gift once a year, but the camaraderie I felt had me excited to participate, and I made a second donation. And to put it mildly, that level of influence is unusual for me.

What did the college do well, and what can your organization learn from this successful fundraising effort?

The whole campaign lasted 1 day, but a lot of research and planning went into it. Watch the 15 minute Bloomerang TV episode with Joe Klen, Associate Dean for College Advancement at Wabash, where he explains how the college planned for the event.

In an almost counter-intuitive approach, the success the college achieved is partly because the school didn’t advertise the event until the day of. Researching this type of fundraising event, Wabash learned that people more easily ignored a day of giving if they knew it was coming.

school made its official ask early in the day, but the momentum was then carried by a group of 175 alumni ambassadors who reached out to their contacts through Twitter, Facebook, email, etc. to make a secondary ask and keep the interest levels peaked. The ambassadors created a lot of excitement, especially on social media, that potential donors couldn’t ignore.

There were over 35 challenge pledges made by individuals or groups challenging donors with specific characteristics (e.g., graduation year, club affiliation, student athlete, etc.) to make a gift that would then have an additional amount contributed. Donors love it when their donation is worth more than the dollars they contribute, and these challenges created additional excitement.

Going back to the first two bullet points, by having a coordinated social media blitz, the college was able to get its campaign noticed on a much larger scale than it would have if it had been promoting it weeks before. Twitter, for example, moves information through very quickly. By having a large group of alumni ambassadors tweeting and retweeting about the campaign, the potential donors were much more likely to 1) see that the campaign is going on, and 2) want to be involved.

This being the first time the college attempted this type of event, they set and pursued a modest goal. Instead of simply claiming victory when that goal was met within the first few hours, they used the emotional energy it created to set even higher goals. And when those higher goals were also met, they remained flexible enough to keep pushing for more. The key to their success, however, was sticking to concrete (and meaningful) goals. They set a second goal of 430 additional donors, and then they set a goal of 1832 (the year of the school’s founding) donors.

The email receipt for giving is common today, but far less common is including a thank you video from students, faculty, and alumni. When you have a connection to an institution, like your alma mater, having a video thank you along with the receipt added some nostalgia to what would otherwise be a basic gift receipt.

It’s an amazing feeling when you’re part of a nonprofit fundraising effort that greatly exceeds anyone’s expectations. Hopefully, your organization can apply some of these and experience your own fundraising success!