The Pique Technique: How It Can Enhance Your Fundraising Ask Strings

Within social science, there exists a theory on user and consumer behavior called the pique technique.

Put simply, the pique technique refers to making an unusual request in a solicitation. The technique is said to be effective because the unusual request gets the prospect’s attention (piques their interest) making it more likely that they consider and fulfill the request (a purchase, donation, invitation, etc.)

There are obviously many implications for nonprofit fundraisers making solicitations, either in-person, electronically or by mail. One of the best opportunities to test the effectiveness of the technique is instances when you’re using Ask Strings.

An Ask String, sometimes called a Gift String, Gift Array, Giving Ladder, Ask Array, or Ask Ladder, is simply a group of suggested gift amounts that appear on a solicitation.

There are numerous studies and opinions that dive into what your ask string should look like; its highest and lowest amount, and everything in between (the excellent “Science of Ask Strings” by Nick Ellinger of DonorVoice and Gift String Logic for Year-End Appeal by Joslyn Creative are the most comprehensive on the subject).

The good news is you can apply the pique technique to your ask string regardless of the range of suggested options.

Instead of ending in 0s and 5s, suggested gift amounts end in odd numbers.

Not only do suggested gift amounts that end in 0s and 5s fail to grab attention, but they also seem arbitrary and not at all thought out.

When combined with a usage statement justifying that suggested amount, the donor’s attention will be grabbed and they can begin to think about the impact before even making the gift.

Compare that to a form from Sightsavers International which has a unique ask string with impact statements: 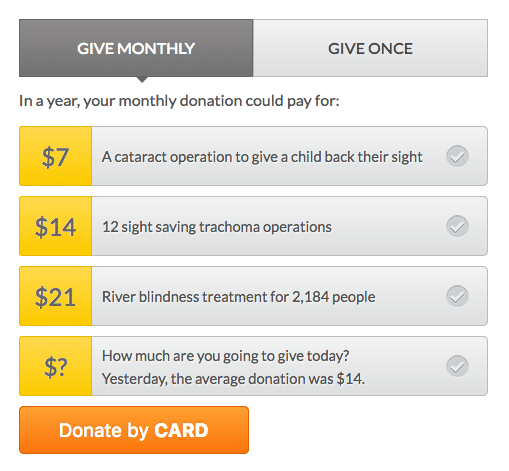 A peer-to-peer donation form from The American Diabetes Association utilizes the same technique: 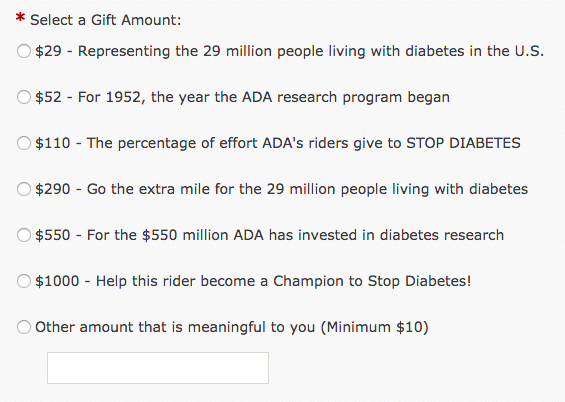 Online donation forms are an ideal place to test the pique technique since they can be modified quickly and easily. They’re also the likely method through which first-time donors will interact with you, making it a great place to begin to communicate impact or communicate other missional information.

Monthly giving ask strings also lend themselves to the pique technique since monthly consumer subscription expenses rarely end in a round number (Netflix, for example).

A case study published by SOFII shows that one odd, aggressive ask amount in a string of “normal” amounts is occasionally fulfilled.

“There is, however, one twist: there is an option to donate a sum of $6,518. We put that figure in because it is the actual average cost of granting a wish. Every now and then, when I’ve done that before, you find a donor who is willing to donate at that level. We did this once for a hospital when the price point for a piece of equipment was $6,942.73. Thirteen people “bought” this device. These donors upgraded from an average of $65 to nearly $7,000. It never hurts to ask.”

There are three ways to craft ask strings using the pique technique:

Once you’ve tested the waters, consider expanding the technique to print solicitations like a live event pledge card or a direct mail solicitation reply device (multiple variations of which can be crafted for individual segments).

Have you utilized the pique technique in any solicitations? Let me know in the comments below!