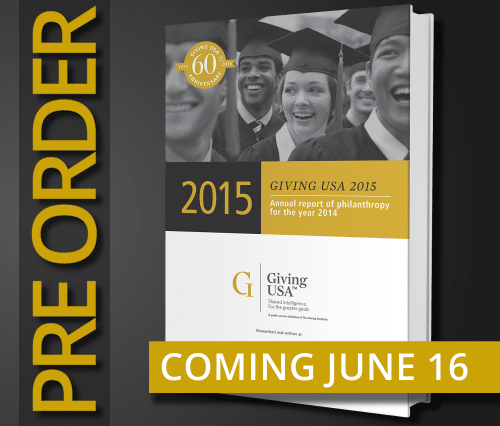 Every June, the Giving USA report is released. This is one of the premier items produced by the Giving Institute and is always well worth reading cover to cover.

In case you have not seen it already, you can view the 2014 report here.

One key statistic of this wonderful report – the percentage of the gross domestic product (GDP) that total giving will represent – will most likely stay the same as it was the year before: 2%.

Why? Here are five reasons:

Breakthroughs seldom happen without the advantage of added capacity and resources.

Within the infrastructure of fundraising at the vast majority of small-to-mid-sized nonprofits, it is rare to see investments being made to add capacity or resources.

For some reason both, internal leadership as well as nonprofit boards seem only to be willing to approve more or less the same budget as the year before! Once that budget has been handed down from upon high, there are a precious few staffers who can find a way for any budget exceptions to improve infrastructure or to add fundraising resources.

With this looming “harness” we call a budget, even in light of a well-developed strategic plan, how can we expect a bold jump in fundraising dollars at any nonprofit budgeting for less than a 5% increase?

Only a rare few will make more than a 5% increase come to fruition.

My good friend Roger Craver ran a blog series titled “Barriers to Growth” just about a year ago.

My favorite section is this one:

Only by adopting very different mindsets and methods can organizations double or even quadruple their income…  …only a small part (15%) of the market is capable of or likely to undertake the necessary changes.

The nonprofit world of fundraising seems to shy away from empirical evidence and clings to concepts akin to passing age-old recipes down from one generation to another.

Part of this will tie into third point below, but suffice to say blind faith to the “way we have always done it” will not lead to breakthrough results!

3) A Dearth Of Proper Testing Of Fundraising Methods

In the nonprofit world, such testing tends to only be attempted by the larger organizations, but even then old traditional methods seem to hang on.

However, when you see large jumps in annual fundraising dollars by certain organizations it is often times due to either an emergency event or new fundraising methods/tactics being put into place based upon testing.

Just think how much more often that would be the case if every organization at least did basic testing!

They often hear methods that are diametrically opposed to each other in some manner or another.

Only a few seek out and achieve proper credentialing such as their CFRE or ACFRE.

Over the last few years, there have been created college degrees devoted to proper training of individuals for these fundraising and nonprofit executive leadership roles.

Without such training, how can we expect game changing breakthroughs to occur? Hopefully, more boards and nonprofit leaders will demand and assist in funding such training in the future.

If nearly six out of ten donors do not give again in the next year, which has been the national average for nearly a decade, how can we see exponential growth?

One only needs to compare to the commercial sector again to see customer retention rates of twice the percentage (if not higher) than the nonprofit sector!

I am going to boldly say as long as the average nonprofit organization has an overall donor retention rate below 50%, the 2% of GDP barrier will not budge.

Just think what an overall rise in the donor retention rate of merely 10-15% would do for overall dollars raised, if all other factors remained constant. We could see the dollars raised percentage of the GDP growing to 3 or 4% over time!

Please let me know if you agree or disagree with the above five reasons for overall giving in the United States staying at 2% for another year.

How else can we help move the needle upward so more missions can be funded?