Veteran technology entrepreneur and current Bloomerang CEO Jay Love was honored by Butler University at their 2014 Alumni Recognition Dinner. Organized by the Butler University Alumni Association Board of Directors, the dinner honored five outstanding alumni and one professor emeritus for extraordinary professional achievement and/or service to the University and their communities. 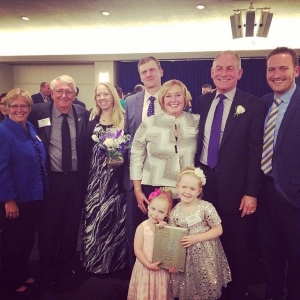 Love received the Robert Todd Duncan Alumni Achievement Award, which is presented to an alumna or alumnus whose class graduated at least 15 years prior to the presentation of the award. It recognizes personal and/or professional achievement which brings honor and distinction to the University and individual attainment and/or contributions for the betterment of society.

Jay B. Love is CEO and Co-Founder of Bloomerang, which helps nonprofit organizations to reach, engage and retain the advocates they depend on to achieve their vision for a better world.

Prior to Blackbaud, he was the CEO and Co-Founder of eTapestry. After growing the company to more than 8,000 nonprofit clients and charting seven years of record growth in Indianapolis, eTapestry was acquired by Blackbaud.

Prior to starting eTapestry, Jay served 14 years as President and CEO of Master Software Corporation. Jay has also been a business consultant for numerous high-tech firms throughout the U.S.

He is a graduate of Butler University with a B.S. in Business Administration. He currently serves on the boards of numerous nonprofits and one private tech company. He and his wife Christie served as Co-Chairs for the Indianapolis YMCA 2011 Capital Campaign and are the proud parents of three children as well as three granddaughters. He was a Founding Chairman of NPower Indiana, Founding Member of Techpoint Foundation and Founding Member of the AFP (Association of Fundraising Professionals) Business Member Council. He also chairs the AFP Ethics Committee.