The Most Important Metric Major Gift Fundraisers Should Track Recently, I spent two days at the Major Gift Roundtable conducted by the Institute for Charitable Giving. I was honored to present on the topic of “Metrics Which Influence Major Gift Success.”

The Institute, celebrating 24 years of training major gift fundraisers from all over North America, was created and is run by Jerold and Felicity Panas.

What Matters to Major Gift Fundraisers

Having an entire ballroom filled with experienced and successful major gift fundraisers, my curiosity got the best of me. I wanted to find out which activity KPIs (key performance indicators) they track, so I encouraged the group to create a monthly scorecard. The group indulged my suggested “stoplight” format: 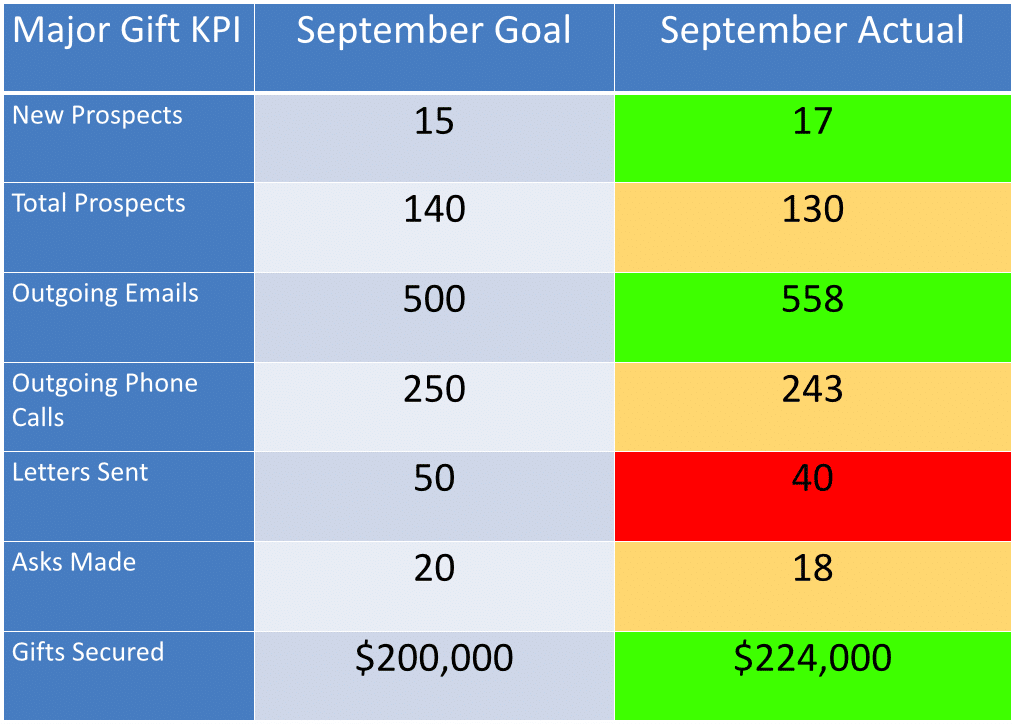 The colors are based upon the following criteria:

Following the exercise, we reviewed the scorecards that had been created.

The most common metrics tracked by this group of major gift fundraisers were:

Did we miss any that you and your team currently track?

The Most Important Metric in Achieving Success: “Asks Made” Besides gift amounts secured, the only metric to appear on all scorecards was “Asks Made.”

This is not an accident!

Every small group in the workshop agreed that the best indicator of future major gift fundraising success was the number of “asks” being made during any time period. Indeed, the other metrics were important steps leading up to the “ask,” but did not signify ongoing success unless the “ask” was truly made.

If your major gift team doesn’t keep a scorecard or spreadsheet of their activities, encourage them to create one using some or all of the metrics listed above. After all, what gets measured gets done!