Let me tell you a little story.

Once upon a time, there was a girl working at a domestic violence shelter. She sat in the corner, and hung out with her cool volunteer coordinator friend, whose desk was in a converted tiny closet.

She was the sole fundraiser, but they called her Development Associate even though she was writing the grants, appeal letters, e-newsletters, running the gala, and more.

Because her rent was high, and she had student debt, she was buying groceries on credit.

Then when she was going to pick up an auction item, she was gunning it on a hill so her car wouldn’t stall. And unfortunately crashed that old, rickety car into the back of a pickup truck.

The truck wasn’t hurt at all, but her car’s radiator dropped and it cost $1,000 to fix.

She had no choice. She needed a car to get to work and perform her job. She got it fixed and went deeper into debt.

To make ends meet, she decided to try to consult again, as she had done before she got this job.

Why am I telling you this story?

That girl was me!

And I’m not the only one who has ever been in that situation.

We conducted a survey into nonprofit payroll and benefits last year that showed 32% of the 1,100 respondents are working multiple jobs. 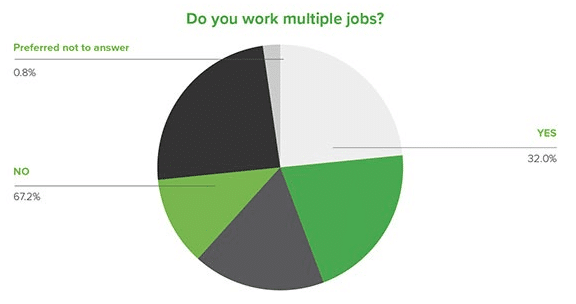 I tried to get clients as I worked full time at this domestic violence shelter… but between my full time job and commuting into town… and the stress of being poor… and not eating right… and losing a lot of friends all at once… it was a stressful time, and I couldn’t really get a ton of client work.

Eventually the stress became too much for me, and I got another job for $10,000 more per year. Making barely $20 per hour was helping me move up in the world. I stopped my second side gig to focus on being successful in my new job.

And then barely 12 months later, the downturn happened. And I had no safety net, no side hustle to keep going in. I put all of my eggs in the job basket, and it completely failed me.

If people in your organization have two jobs, I would argue that you are not paying them enough.

How much is enough?

If you look at the housing map pictured here, according to the National Low Income Coalition, you’ll see how much money someone needs to make, per hour, to afford a a two-bedroom home in each state (without paying more than 30% of their income in housing costs):

In Oregon, where I live, the minimum is $20 per hour. In New York, where my friend Kishshana lives, it’s $28 per hour. And in Hawaii, it’s $35 per hour. The only place you can maybe of get away with paying less than $15 per hour is Arkansas.

The point I’m trying to make is:

…then paying your people more is a very good step towards that world!

If you “can’t afford” to pay people more, then:

…so that you can, in fact, afford to pay people more!

And, sure, some people might say “I want to work multiple jobs! It fits my lifestyle!”

That may be true for a very unique set of circumstances. However, for the majority of your employees, a second job should be a warning sign.

What do you think? Please leave me a comment below!