What Fundraisers Can Learn From the Nintendo Crowdfunding Parody Late last month, Nintendo launched a crowdfunding parody for it’s upcoming Wii U game “Game & Wario.” For those of you who aren’t familiar with Wario, he’s basically an evil doppelgänger to Nintendo’s emblematic hero plumber, Mario. While the campaign does eschew typical crowdfunding norms and the kind of tact you’d expect from a nonprofit, there are some interesting lessons that all fundraisers can glean from “Crowdfarter:” 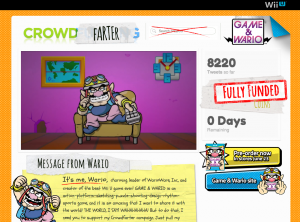 It Doesn’t Always Have To Be About Dollars

Instead of donating dollars, backers simply share the page via their social media accounts. The campaign became “fully funded” once it’s goal of shares had been met, unlocking an exclusive trailer for the game. Nintendo’s goal here was exposure and virality, not money. Imagine the freedom and fun you can have when your goal is awareness, and not a donation! Backers were also given unique gifts that further encourage grassroots promotion, such as desktop wallpapers, ring tones and digital badges.

Speak To Your Audience

While this particular parody is somewhat crude, it does speak to the unique demographic who would be interested in this video game. It’s clear that Nintendo understands its audience. The campaign also adheres to established brand standards. Wario has long been a lowbrow and boorish character, so it’s fitting that the overall look and feel of the content mirrors that persona. Don’t be afraid to let a little personality shine through, especially when promoting a very specific goal or campaign. There’s a reason Nintendo didn’t put this on a generic, Nintendo-branded landing page and hope to captivate an audience. Get specific, get unique, create something that will stand out to the audience you’re trying to reach.

It’s not an accident that the top-most piece of content on the page is a video. Online video is an incredibly powerful storytelling tool. If you can’t make a personal appeal, it’s unlikely that your campaign will gain traction. Make the investment in video, even if it’s just a simple web-cam or iPhone clip.

There are thousands of crowdfunding campaigns out there, all vying for attention from prospective donors. How will you make yours stand out?