The Impact of Visually Sharing Your Nonprofit’s Impact

The Impact of Visually Sharing Your Nonprofit’s Impact

The latest e-newsletter from the Lawrence Township School Foundation caught my attention from numerous perspectives. They included a rich infographic that communicated the impact the foundation has made over the last two years. 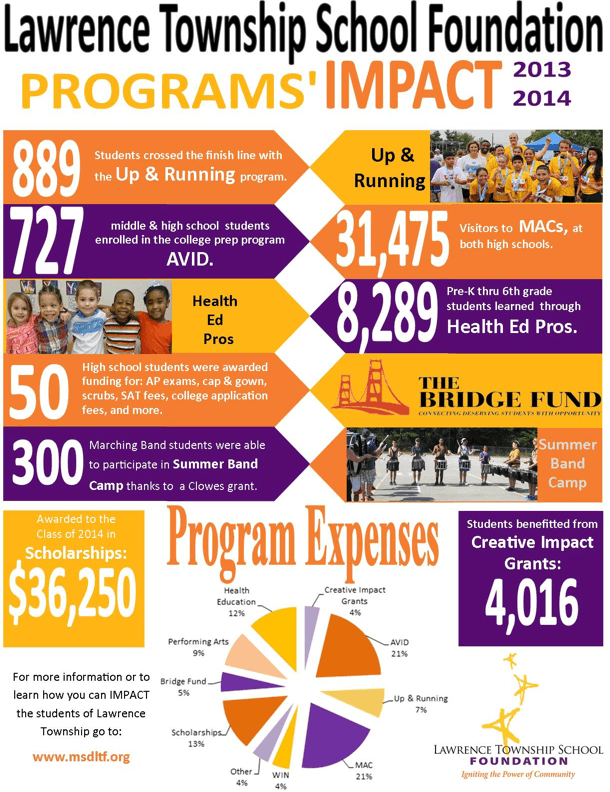 First, the blending of quick facts with heartwarming pictures and splendid colors drew my eyes to just about every single portion of the image.

Second, seeing the specifics of just where the donation dollars were used brought the mission to life. I can just imagine every donor finding the specific project or area his or her dollars are supporting.

Third, you could just sense the pride in what they were achieving as an organization.

Fourth, they were not shy about sharing specific numbers and percentages. Bravo to them for being so open and honest!

Most of all, this single image conveyed all of the raw numbers needed to better understand the real impact while leaving the rest of the newsletter for “human interest stories” to be shared.

In fact, the foundation recently rebranded their annual report entirely. Instead of calling it an annual report, they call it an “impact report.” That completely changes the focus of the report from the organization to the supporters, a main tenet of effective donor communications.

This newsletter shows how the most important people – the donors to the foundation – are making an impact in an innovative manner. I never tire of seeing such a win/win happen. How about you?