5 Facebook Fundraising Tactics to Try in 2020 for Your Nonprofit

Love it or hate it, whether you use it or not, the reality is that Facebook has changed the face of the world permanently.

Whether it be connecting with friends and family, watching funny videos, or checking out news and causes, 2.9 billion people turn to Facebook monthly to get and share information.

Not only has Facebook changed the way that humans (in most of the world) communicate, they’ve completely changed the fundraising game.

We’ve all heard the statistics – Facebook’s charitable giving tools have topped $2 billion from 45 million people since being introduced on the platform.

There are two ways for modern fundraisers to handle the popularity and proliferation of Facebook fundraising tools:

I say let’s go with #2. Fundraisers should always aim to be more proactive than reactive, more forward-thinking than self-pitying. At least the successful ones (wink).

In that spirit, here are five Facebook fundraising tactics to try in 2020 for your nonprofit.

1. Add a page to your website telling people how – and WHY – to set up their Facebook Fundraiser.

Believe it or not, your donors and supporters are not born knowing how to fundraise. (I’m sure you can relate!) Also, asking friends, family, and colleagues for money can be downright uncomfortable for those not accustomed to asking for money and support.

Giving potential fundraisers the tools necessary to create and launch a successful Facebook fundraising campaign will not only be a huge win for you, but also a huge win for them!

Giving them this information is OUR job as proactive fundraisers. Make this process super easy, fun, and accessible to all.

Be sure to title the page something easy to search for, and very clear, such as: How to Set Up and Run a Facebook Birthday Fundraiser for (Nonprofit Name). Then add suggested graphics, photos, video links, stories, and data about the problem they are helping to solve.

For extra credit, and added success, provide tips on not only launching the fundraiser but running it! Share with them why it’s important to keep people updated, show the impact of the donations, and create connections using personal storytelling.

If you’re looking for examples about how to set up effective Facebook fundraisers, check out this organizations’ guide: BrightFocus Foundation – Create a Facebook Fundraiser

Do you know when your donors’ birthdays are? What about the people who run races for you, raise money during walk-a-thons and other events?

Even if you just have this data for a handful of them, send out an email at the beginning of the month asking them if they would start a fundraiser on your behalf.

Walk them through the steps required, and of course, share exactly where the money would be going and the potential impact.

Be sure to inspire! This is not a transaction. If someone donates their birthday to your cause, they are more likely to become a major donor, a monthly donor, and/or leave a bequest. These donors are extra special and should be treated as such!

3. Use Facebook Ads to encourage people to start Fundraisers on their birthday.

Targeted Facebook Ads can be a very effective way to get your supporters to take notice and encourage them to start a birthday fundraiser for you.

I do not recommend creating a basic Facebook Ad and spraying it out to the entire world. Complete strangers on Facebook don’t know you, they don’t trust you, and they may not even like your cause – so why would you waste your money showing them an ad?

Target your current audience – the people who know you, love you, and most importantly, have raised their hand to say that they want to hear from you. They are interested! How are you acknowledging these amazing people who are raising money for you from their friends, family, and Facebook network? They are putting themselves out there.

I hope you are at least thanking them! A better way is to create a system where you showcase them and their campaigns on your Facebook Page and in your emails. Maybe even on your website!

This is a win-win because they feel motivated and thanked, and you are showing others what’s possible. 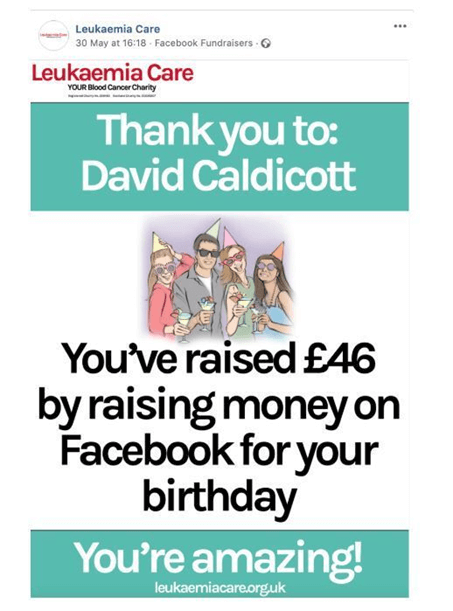 5. Stop worrying about the third-party donors who don’t want to hear from you.

Ok, so this isn’t so much a “tactic” as it is just a necessity.

If you are consistently hung up on Facebook’s lack of reporting the donor data to you, you will never fully be able to move forward and embrace the power of the platform.

Third-party donors are different from other donors. They gave because of a friend or connection on Facebook – not necessarily because of your cause or your organization.

I expect Facebook, Instagram, and YouTube fundraising to increase exponentially in 2020. As fundraisers, our job involved learning about these new tools, seeing if our donors are using them (or if they want to use them), and adapting our strategy accordingly.

It’s not about us. It’s about what our audience, our community, and our donors want.

To learn more on this topic, check out Julia’s free and premium trainings at CharityHowTo here!