The idea behind this campaign is that, although the “donate now” button is a great addition, its visibility will be greatly reduced due to the fact that Facebook’s algorithm favors users and brands who use its paid products, such as ads and sponsored posts. Nonprofits, in general, lack the ad budget to keep up.

This rallying cry has spawned numerous blog posts, tweets and emails in support of the petition. But is this really in the best interest of nonprofit marketers?

Polishing the Brass on the Titanic

While there is a precedent in the form of Google’s Nonprofit program, which grants up to $10,000 worth of ads per month (which doesn’t go very far, by the way), it is extremely unlikely that Facebook will ever create a similar program.

Facebook’s entire monetization model is based on paid advertising, and every algorithm update over the last few years reinforces that model. Brands who were enjoying a free lunch in the form of interactions and conversions on their Facebook pages during the mid-to-late 2000s have seen organic impressions drop precipitously, forcing them into an ad spend or irrelevance. One study reports that brand pages have suffered a staggering 44% decline in organic reach since December 1, 2013.

An ad grant of this nature would only perpetuate the root cause of why nonprofits are currently seeing diminished engagement on Facebook: more ads, less organic content. Congratulations, petition supporters! You’re working to make Facebook worse. Why stop at nonprofits? How about small businesses? They’re in the exact same boat. How about schools? Hospitals? Churches?

Do you like ads in your newsfeed? When was the last time you clicked one?

Furthermore, studies show that usage among teens is slipping, while tweens are skipping the network entirely in favor of Instagram, Snapchat and Twitter. Pew Research reported last year that 61% of current Facebook users admitted to having voluntarily taken a break from using Facebook for a period of several weeks or more.

Regardless of the long-term viability of the network as a useful method of outreach, a new set of issues would emerge were this ad grant to be gifted.

Let’s say you were gifted a grant. Where would you begin? These are just a few examples of what goes into a Facebook ad:

Easy-peasy, right? You’ll also need to write copy for the ad and source an image.

Don’t forget: you have to create a campaign, landing page or call-to-action to promote – along with goals and objectives – before you can even dig into this.

Mid-market and enterprise for-profit brands have entire teams within their marketing departments solely dedicated to paid search, social media ads and retargeting. It is an exact science with little room for error, but a lot of room for A/B testing and conversion rate optimization. These marketers live and die by single-cent changes (yes, as in pennies) in cost-per-impression and cost-per-click. It often takes numerous campaigns to discover what works and what doesn’t.

Even if a nonprofit staffer at a small or medium-sized organization could find the time and garner the expertise to adequately plan and deploy an ad or sponsored post, it’s likely that that time would be better invested elsewhere. I don’t mean to discourage anyone reading this, but I wouldn’t be terribly excited about being given a brand new BMW with the caveat that I would have to rebuild the engine myself to drive it.

A Culture of Acquisition and the “Free Mindset” 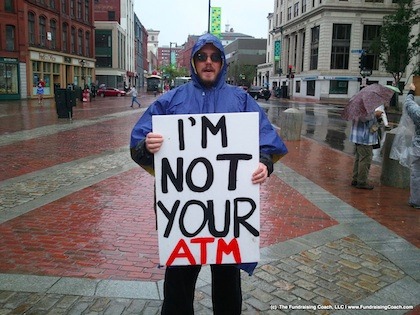 It’s easy to succumb to shiny object syndrome when it comes to new and exciting ways to generate donations, but the dismal data on donor retention begs for a change in mentality. Imagine the results from focusing on the cultivation of existing donor relationships through genuine, personal communications, rather than a digital spray-and-pray to a nameless, faceless group of digital bank accounts. Besides, isn’t Facebook all about engagement and not solicitation?

Very few are up in arms about staggering low donor retention rates, but many are crying fowl over unfulfilled entitlement.

Our friend Pamela Grow writes that nonprofits need to lose the free mindset. Web hosting, donor management software, graphic design, Facebook ads and video production should always be free for nonprofits, right? Watch out: you might get what you pay for.

This Is What Nonprofits Need More Than a Facebook Ads Grant

Given that Facebook as a channel has become far too costly for small-to-medium sized nonprofits to see a return on investment from, I have a few suggestions on where they might better spend their time.

There is power in numbers. If your brand page is the only profile on Facebook sharing information about your nonprofit, consider leveraging the personal accounts of your staff, donors, board members and volunteers. Each of them represents a potential audience, multiplying the visibility of your content. Have them share information about your organization. They’ll likely see higher engagement than from your brand page alone.

If you haven’t dipped your toes into the waters of Google+ and Twitter, it’s time to. Twitter has vast potential in brand management, social listening and referral traffic generation – without an algorithmic newsfeed. Who you follow is who you see.

Investing in content on your own website, such as a blog, is much less precarious than leveraging so much on platforms you don’t own. The more you can do to drive traffic to your own website, add email subscribers and grow your overall community, the better. It’s true that many nonprofits have spent a lot of time and energy building their Facebook community only for it to diminish due to their evolving business model, but what better argument is there in favor of building a community around your own owned platforms? You don’t need a grant from anyone to publish a blog post.

Here’s a fun experiment: the next time you open up Facebook to post a status update from your nonprofit’s page, close your laptop and instead write a handwritten note to five donors letting them know how much their support means to the organization, apropos of nothing. Compare the results against your last Facebook post.

What do you think about the idea of an ads grant for nonprofits? Let me know in the comments below.