How Plan a Capacity Building Campaign

Are there more demands for your services than ever before? Are you worried about raising enough money to meet the rising need?

If so, a capacity campaign might be the perfect solution for you.

Capacity campaigns adapt the capital campaign model to fund growth in organizational capacity. You don’t have to wait until your organization needs a new building. Instead, you should start thinking now about what you should invest in that will increase your organization’s capacity to do more good.

Why People Give to Capacity Campaigns

You may think that donors give to capital campaigns that raise money for a new building because they want to get their names on plaques. But for the most part, that’s not the real reason they give.

Most people give to building campaigns because they believe in the work your organization does and they want you to do more of it or do it better.

New buildings do have a special allure. A rendering and a floor plan combined with an inspiring story capture a philanthropic imagination without much effort. An extraordinary gift from a generous donor will make a big, tangible, long-lasting difference.

But the tangible nature of investing in a building is only one of the important aspects of a capital campaign.

Capital campaigns are constructed according to powerful marketing strategies that increase people’s desire to give. And you can use those strategies to raise money for other capacity building programs as well.

Below are eight of the standard capital campaign strategies that you can use to raise money for investments in capacity rather than capital.

But first, here’s an important concept that sets the stage for a capacity-building campaign — whether for a building, or systems and technology, or training, or equipment, or any other investment that will increase your organization’s ability to do more good.

The answer to that question points to the heart of capital campaign fundraising – the difference between recurring, annual gifts and special, occasional gifts.

Most donors think differently about gifts they intend to make annually than special, one-time gifts. They make smaller recurring gifts they can sustain year after year to annual fundraising. And now and again, those very same donors are willing to make larger gifts on top of their recurring contributions to help boost the organization’s capacity.

Think about annual gifts you make year after year to an organization that is meaningful to you. Chances are good that you give a standard gift amount. You may increase your gift size over time, but for gifts like that, you calibrate the amount based on your expectation that you will give again and again. Chances are good that you make that annual gift from your checkbook or easily available assets.

You wouldn’t be offended by the ask. And you probably wouldn’t think of a second gift as replacing your annual contribution, especially if the organization makes it clear why both gifts are needed.

In campaign after campaign, that’s what we see. People who are committed to an organization and make recurring gifts made year after year are often willing to give special larger gifts now and again to help the organization increase its capacity to do more good. And sometimes those special gifts are much larger!

But the occasional nature of these big campaigns is only one reason people give so generously. Another, and perhaps more powerful, reason is the way they are structured. Successful capacity/capital campaigns are organized in a way that creates the confidence and enthusiasm necessary to reach the big campaign goals.

I use the phrase “Capacity Campaign” to refer to a special, occasional campaign to raise money to increase an organization’s capacity to carry out its mission. That might include a building project or a collection of other capacity-raising investments. Dive into this concept further with our guide to capital campaigns for capacity building, or continue reading below to explore the key principles.

1. Rely on Your Current Donors.

Capacity campaigns rely on the same donors that give recurring annual fund gifts year after year. These campaigns are not the time to go to wealthy people who have never heard of your organization. They are the time to go to those recurring major donors in your files who could give more — much more. And, we’ve seen that these are the donors most energized to give during the pandemic.

2. Articulate the impact that will come from a special campaign gift.

3. Create a pattern of gifts that relies on a few large gifts.

The top gift to your campaign should be at least 20% of the campaign goal. And together, the top 10 gifts should result in at least half of the campaign. This reliance on large gifts will focus your attention on 20 to 30 prospective donors. This laser focus on large donors coalesces attention on building the relationships with that small group of people who can make your campaign successful. Review the chart below from the Capital Campaign Toolkit’s guide to gift range charts to see an example of what this might look like: 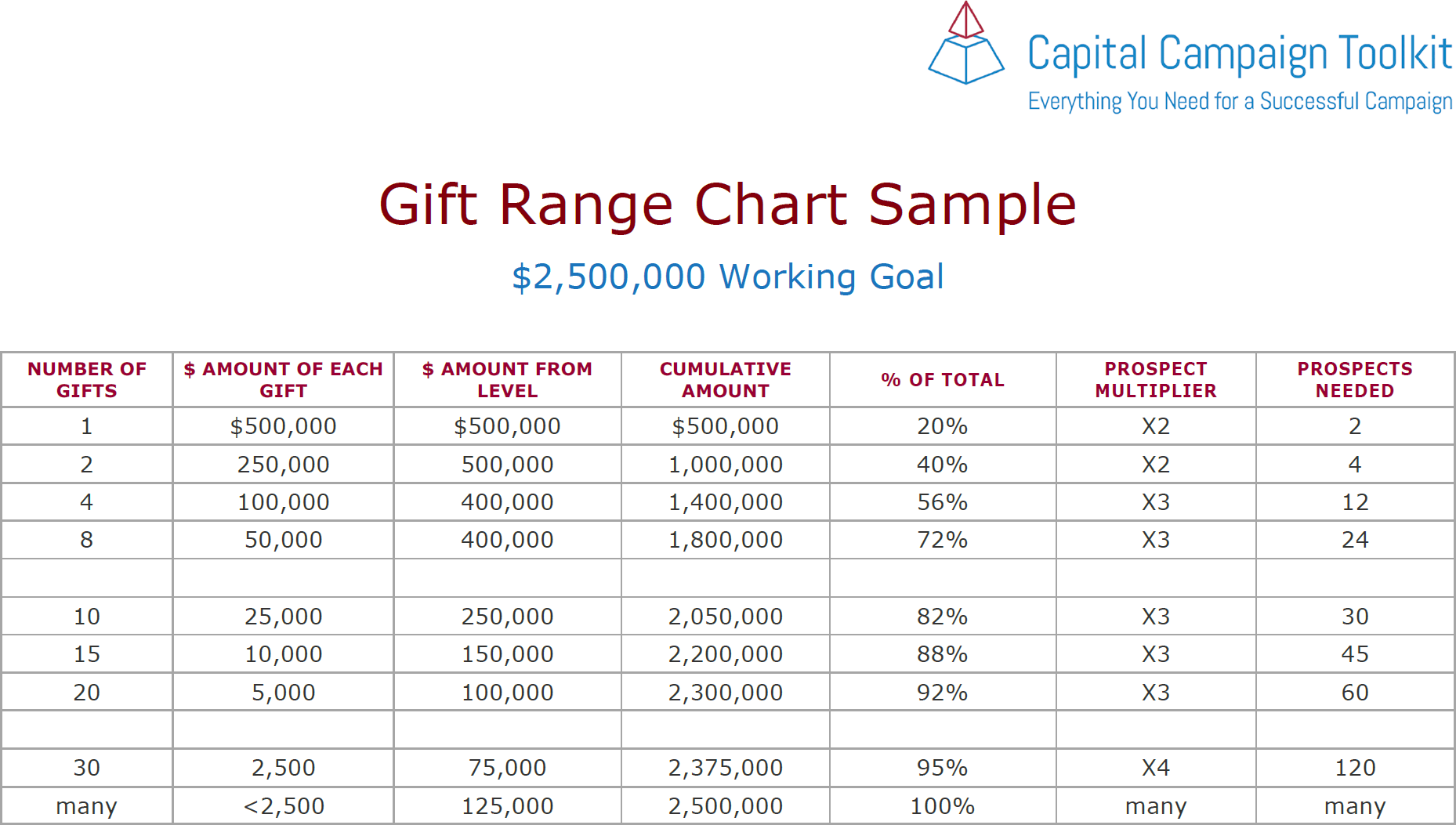 4. Base your campaign plans on a “working” or test goal until the top gifts are in.

You will not know for sure how much money your campaign can raise until the top 20 or so donors have made their commitments. So successful campaigns use a soft goal as they solicit the top gifts. They don’t publish that initial goal though they do discuss it with their key donors. Then, when the gifts are committed, they can reevaluate how much the final goal will be before making a public announcement.

5. Involve the largest potential donors in the planning.

Some of the most important preparation for any capacity campaign is identifying the 20 to 30 prospective donors who might make the largest gifts and involving them in planning the project. Don’t wait until your plans are finalized before discussing them with that important group of donors. Their opinions matter and may help you fine-tune and improve the plans.

6. Solicit the largest gifts and board gifts first.

Successful campaigns use a strategic order of solicitation. They begin by soliciting the people who can give the largest gifts and their board members. Those initial key commitments will create a sense of confidence in the success of the campaign that other donors will need to get on board.

All of the top gifts to the campaign should be solicited in person whether through Zoom or in a more traditional in-the-room meeting. While you may send written proposals and material as collateral, that material should not be sent in lieu of a personal meeting. And, top donors should never be solicited as a group.

8. Adhere to a campaign timeline.

Successful campaigns have a clear timeline. Often, they take 2 or 3 years, but they shouldn’t drag on for a decade. The intensity created by a specific timeline boosts the energy and makes it easier to recruit volunteers.

If you know that with an investment of money, your organization can ramp up its ability to serve, you should consider a capacity campaign.

A capacity campaign will be over and above your annual fundraising. You will go to many of the same donors who give to you year in and year out. If you have a clear and credible plan for why an infusion of money will make a big difference, they will be excited to give.

Your capacity campaign should use the tried and true principles of capital campaign fundraising outlined above.

If you do that, you are likely to be able to raise more money than you might imagine!