U.S. Donors Are Old - Here's What To Do About It I’m lucky. And it’s a huge advantage. I actually know the exact average age of the donor I’m writing to persuade when I write direct mail appeals for a major hospital system in southern California.

I can picture precisely whom I’m writing to.

I also know the exact average age of the prospects this hospital mails to by the tens of thousands, hoping to acquire new donors.

OK … I hope you’ll indulge me now … and take a little quiz.

I want you to guess the average donor’s age at this particular hospital system. The answer’s at the bottom of this post. Don’t peek.

I also want you to guess the average age of the actual prospects.

Got your two guesses in mind? Okay, now you can peek. 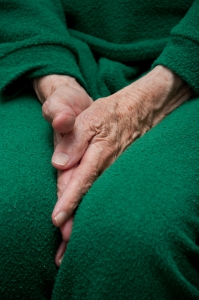 Meet a real-life average donor. Her name is Jane.

When I write my direct mail appeals, I write to Jane more or less. After all, you really can’t just write to some nebulous “great unknown.” Trust me: you’ll stall. You have to assume there’s a particular audience out there who will be especially receptive to your message.

That audience isn’t everyone. It’s a specific few. Like Jane.

As the late, truly great George Smith said in his book, Tiny Essentials of Writing for Fundraising, “All fundraising copy should sound like someone talking.” George Smith advised having a clear, mental picture of the person you’re addressing, as you start writing. I have found his advice to be durably sound.

I know Jane unusually well because she’s my mother-in-law. Put aside “mother in law” stereotypes. I admire and respect Jane. And to the depths of the earth I will always adore her because she gave the world Simone.

She reads the New York Times daily and consumes crossword puzzles like salted peanuts. She fusses on about, “I can’t remember anything anymore.”

Jane is by nature charitably inclined. Raised on Midwestern milk and values: you help when you can.

She is “direct-mail responsive.” Jane gives to a half-dozen local charities and the occasional national advocacy group. She gives to Smile Train because they asked … and because she had six kids born without physical deformities. “I’m thankful.”

Jane has put money in her will, for her university.

What does the university mean to her? She still eats at the Faculty Club. (Universities: Are you distributing fundraising materials with the menus?) She met her husband there as an undergraduate. She worked and volunteered there for decades. Her husband taught there for decades, retiring as the department head. All her six children graduated from there and subsequently did just fine.

TV is a big part of Jane’s life, now that it’s hard for her to get around. She gives to her local PBS TV affiliate.

Writing To The Janes of This World

Well, probably not what a 45-year-old or a 60-year-old needs to hear … not entirely, anyway.

Look … if the secret to ever-increasing success in sales is the ever-more-refined segmentation of your target audience (and it is) … then writing in a different way specifically for a 75-year-old ear, eye, and brain just makes eminent sense.

We ignore age in our appeals, by and large.

Your “one size fits all ages” appeals ignore a juicy fact: a 70-something is way different than a 50-something.

I professionally assess maybe 100 direct mail appeals every year from various charities. Based on this sample, I can say that the only charity I’ve yet encountered that maybe writes age-specific appeals is AARP (formerly the American Association of Retired Persons).

To all you 20-somethings who’ve just entered the fundraising profession….

To all you 30-somethings who are rising fundraising stars….

To all you 40-somethings who are solid-as-rock fundraisers….

To all you 50-somethings who are standing near the peak of your career….

… you have not yet (long may you live, I hasten to add) personally experienced the bubbling mires of a 70-something heart and mind.

Unless you’re an adult caregiver. Then maybe you know.

Sophie Penney introduced me to this book. In How to Say It to Seniors, David Solie insists that 70-somethings are urgently interested in just two things:

Another thought for today: Isn’t the “quest for younger donors” just, for many fundraisers, an attempt to deny the facts on the ground – that the old like to give, and the young have other ways to spend their surplus cash?