A misnomer whose time (sigh) has come

Yes, I was being facetious. It is one of the bigger bits in my DNA.

As in this scene:

“My dear trustees,” he began.

The director of development glanced out at the city’s skyline and straightened his very expensive tie. The Empire State Building loomed just two blocks away. A light mist obscured the top.

“We’re down about 20 mil this year.” He shrugged with a certain je ne sais quoi, so they’d know this wasn’t a crisis yet. “It’s time, my friends, to hit the low road again, just for a month or two. We’re going to buy airtime for our ‘filthy, down-trodden kid’ ads on late night TV. I know we heard a few complaints last year. They’re sad to watch, all the rain and diarrhea. But that kid brings in the bucks, I promise you. We need him now. He’s our fundraising superhero.”

I wish it were all that simplistically easy. 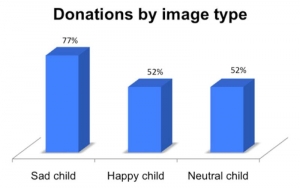 What they are really saying

Yet … if you have a professional fundraising bone in your body, please consider the following chart:

Jeff Brooks posted this chart originally, from the American Marketing Association. The research is recent. I show it to thousands of fundraisers a year. It’s self-explanatory.

In case you’re not good with numbers, though, let me translate: “Sad children raise more money by far than happy children. End of story. If you’re a professional. And yet the “debate” swans on.

It’s also probably a garden-variety generational assault. Every entry-level generation finds a way to disparage those who came before. The theme: “Why those higher on the org chart are diabolically stupid, even evil.” Read Jung or Joseph Campbell or somebody. It’s basic.

A special message to HR

Closing “the empathy gap” is tough. People have to see what’s wrong before they want to fix it. The charity brings to the world a message, “Look, this is evil. But you can do something about it.” And generous, wonderful and trusting souls respond, “OK, I can help you with that problem.”