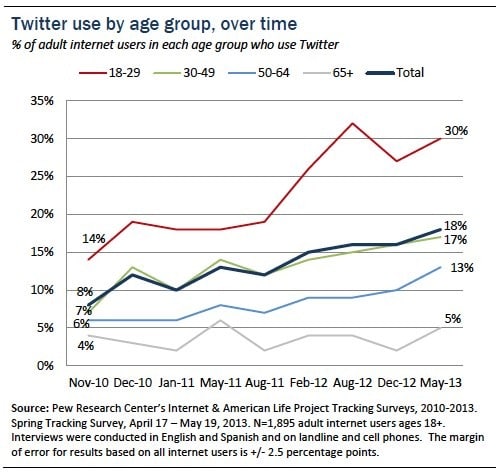 With all of the available social networks available to nonprofit marketers and fundraisers, it can be hard to appropriately allocate resources to the ones that matter to their individual charity. Last December, PewResearch released their 2013 Social Media Update report which studied the demographic details of the five major social media networks: Facebook, Twitter, LinkedIn, Instagram and Pinterest. Here’s a quick look at the data and how fundraisers might reevaluate where they spend their time:

Facebook continues to have a broad, general reach among all Internet users. Targeting specific demographics can be difficult without the use of paid ads, from which you can categorize your intended audience by age, sex, location and interests. 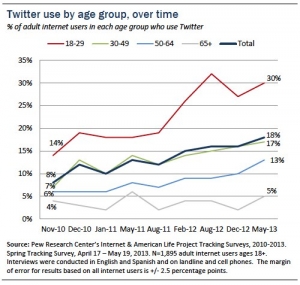 The 18-29 year-old age bracket dominates Twitter, with all income levels distributed nearly evenly. Influential Twitter users enjoy a high level of engagement thanks to the ease of sharing (retweeting) and non-algorithmic newsfeeds (who you follow is who you see).

Interestingly, the Pew study also showed that Twitter users not only skew younger, but tend to be more politically liberal and more negative in the content of their tweets. Charities focused on more progressive, global issues may be able to tap into some of that outrage.

The king of business networking and employment opportunities may also represent an outreach channel for your nonprofit. Major gift officers may want to pay particular attention to LinkedIn given its penchant for attracting high earners who care about their public online personas.

The image sharing network continues to see growth following its acquisition by Facebook. Curiously, Instagram users are the second-most engaged after Facebook users. Consider getting visual with your nonprofit, and don’t forget that Instagram supports video now too!

According to Piper Jaffray, Instagram is now the second-most important social network among teens. Savvy charities may be able to create engagement and loyalty among future donors through Instagram.

Give that the Women’s Philanthropy Institute at Indiana University recently found that older women in all income brackets are more charitable than men, Pinterest may not be a bad place for fundraisers to spend a little time.

Be sure to check the PewResearch study for the full demographic breakdowns all of all five networks. What about you? What social networks do you target given the unique nature of your nonprofit? Let us know in the comments below.