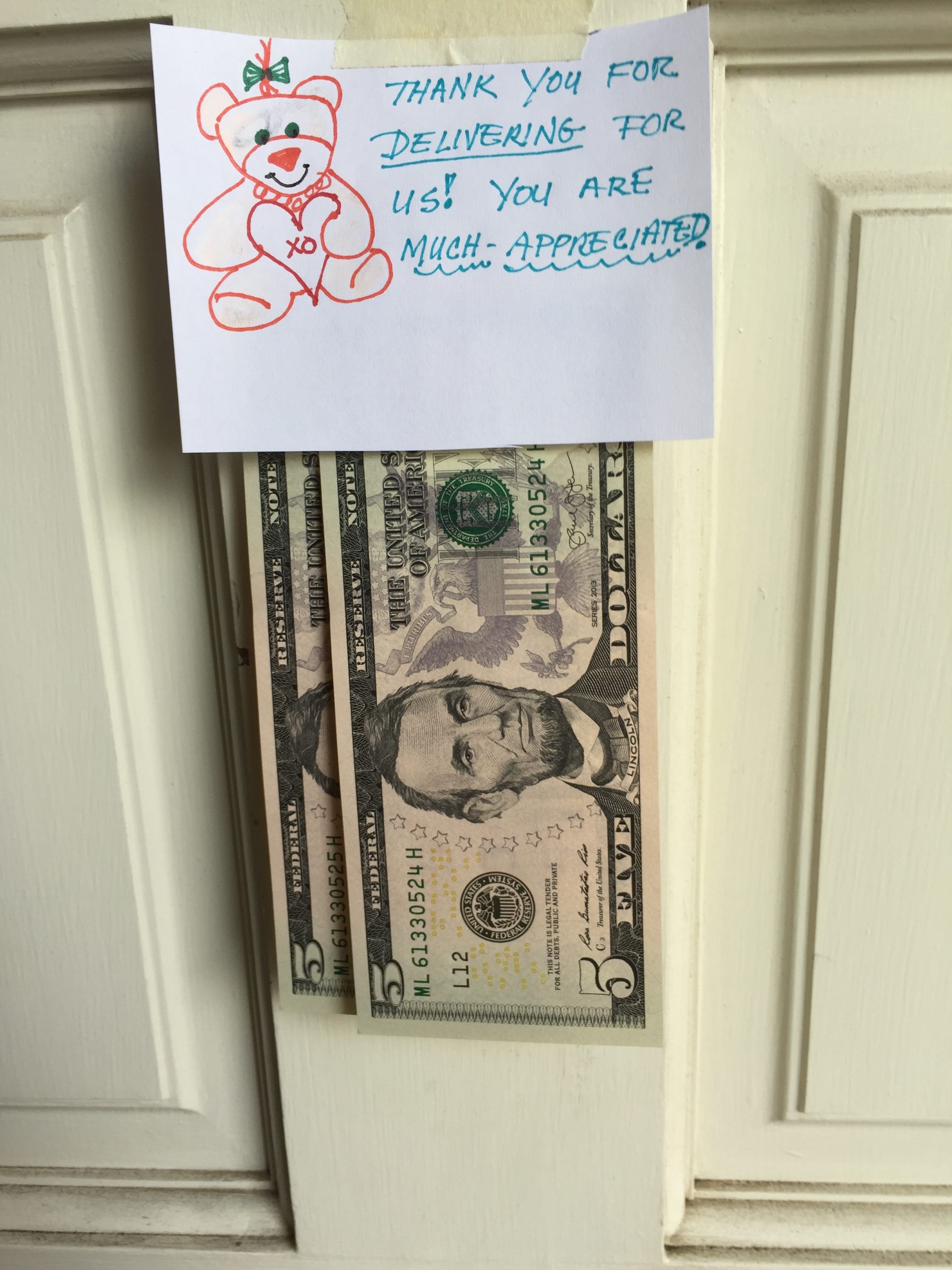 You know what the word ‘tip’ means right? Commonly we think of it meaning “to improve performance,” though it really stands for giving something to another. And, if you’ve read my articles here, on Clairification, or some place else, you know I often say “If you want gifts you must give them.”

A tip is a gift. It’s a little something extra. You don’t have to offer it. But… it’s a really good idea.

You may not want to hear anything about doing something extra right now, especially when it comes to something that seems less essential than asking for money. I understand You’re likely pretty stressed. Maybe you’ve lost some staff, or you’re working reduced hours.  So perhaps you think you can let thanking donors slide a bit. Maybe you don’t have to be so prompt. Or as personal as you may have been in the past. And, surely, one thank you is plenty.

Guess what? Everyone is stressed right now, donors included. In today’s environment, if you handle thanking cavalierly, that’s like going to your neighborhood restaurant for take-out, telling them you’ll pay when you get around to it, and then not leaving a tip.

Now’s the time to go the extra mile. Thank you’s are actually an especially big deal right now, because people are stretched thin. Why not ‘tip’ your donors with extra gratitude right now, rather than succumbing to the notion thank you’s are no big deal during a crisis?

It’s ‘just a simple thank you.’

In the mind of your donor, there’s no ‘just’ about it.

While on one level donors may understand you’re struggling and stretched thin, on another level they still want to be rewarded for digging deep and giving what they can to help you get through this crisis. It’s human nature to seek validation. A little reinforcement for a good deed well done. From the donor’s viewpoint, a simple thank you is the least you can do.

Deep down, donors simply don’t want to hear you didn’t have time to thank them for their gift.

As understandable as your excuses may be, this doesn’t mean you have permission to use them. At least not if you want to make the best – and smartest – use of your precious resources. .And, to be honest, saying thank you may be one of the most important things you do to build lasting relationships with your supporters. This was true before the coronavirus, and it’s just as true today. Human nature hasn’t changed.

You see, ‘thank you’ lets the donor know you can be counted on. It tells them (1) you received the gift, (2) you appreciated the gift, and (3) you’ll put the gift to work as they intended.

Thank you reassures donors their money didn’t go into a black hole.

When you make the effort to express thoughtful gratitude, donors feel they can trust you to put the same effort into how you use their philanthropy to make an impact. And trust is the foundation of any lasting relationship.

People are looking for folks they can trust.

Sadly, trust is in shorter supply these days than usual. People are feeling frustrated institutions they used to count on aren’t coming through for them. Your nonprofit can fill this void simply by following up with donors in a timely, thoughtful and personal manner.

‘Thank you’ does the trick. But only if it’s done well.

A perfunctory receipt, an automated email, a generic thank you landing page that doesn’t reflect the specific campaign to which the donor responded, these tell the donor you couldn’t be bothered with anything other than the path of least resistance. Whatever you do, don’t make it appear all you wanted was your donor’s money; now that you have it, you’re done! That’s what I call treating donors like gumballs; chew ‘em up, spit ‘em out. If you want to see your donor again, you have to actively appreciate them.

Be kind; it’s the right thing to do.

You tip folks who serve you in other ways all the time. Why? Because you’re grateful for the service, and… you want to improve performance for next time. This makes the interaction more enjoyable for all parties. It’s a win/win.

Living in the Pandemic Example: This is what I’m doing right now when people deliver packages to my front door – even if I’ve already paid and added a tip online. It feels good to do this, and I’ve heard a few exclamations of “Aww…” from folks dropping things off.

You can do something similar with your donor thank you process. An ‘extra’ expression of gratitude can make giving to you so much more enjoyable for your donors – especially if you go the extra mile.

Don’t worry you’re being excessive; gratitude is most effective when it’s repeated.

Per research by Dr. Martin Seligman, expressions of gratitude bring people measurable joy; alas, the effects of gratitude wear off pretty quickly. So don’t let the fact your donor has received an emailed or mailed thank you stop you from connecting again, and even more personally.

Let’s look at different ways you can offer an extra serving of donor gratitude, beginning with the most effective.

[NOTE: Templates will follow in Part 2 of this two-part article]

There is something magical about a PURE thank you call!

Anyone with a warm personality can make these calls. They’re best made within 48 hours of the gift, which argues for a quick call from staff as a best practice. For larger donors, the call should come from the executive director or other perceived V.I.P. Calls made by board members also pack a lot of punch.

Research (which has been repeated over two decades by Cygnus Applied Research) shows donors who receive a personal call from a board member within 48 hours will give an average of 39% more than those not called — even after 14 months. Another study by McConkey-Johnston International in the UK found that first-time donors who get a personal thank you within 48 hours are 4x more likely to give a second gift. Recent Bloomerang data confirmed this.

Calls, it seems, have a real lasting value.

They’re also pretty fun for board members – once they get over the hump of picking up the phone and getting into the groove. Why? Because donors are so surprised (relieved) you’re not calling to ask for money but just to say thank you. This makes the call a ‘feel good’ for everyone, and helps callers get comfortable talking with donors. Honestly, when I worked as a development director it was not uncommon to have board members ask me for more assignments because the calls were so enjoyable. Plus the calls predispose those called to make another gift next time they are asked. This is well worth your time and effort!

We’re in abnormal times, and no one expects business as usual. That being said, donors are more than willing to be pleasantly surprised when you meet or exceed their expectations. So, how about it? Why not print out a list of donors who’ve supported you since the coronavirus entered onto the scene and farm them out to staff and volunteers to make some quick thank you calls?

Donors can be forgiving; they can also be forgetting. You want to reach them before they forget they made a gift to you. Otherwise, your call will lose some of its power. Also, one of the reasons you’re calling is to predispose these donors to give again the next time you ask. The more recent a donor’s gift, the more likely they’ll give again. So thanking sooner is a version of striking while the iron is hot. It’s just smarter that way.

Don’t thank donors for helping your organization be successful.

Instead thank them for the impact they are making. Send script templates to callers so folks feel comfortable with the simplicity of the task you’re asking them to take on. I made 10 calls yesterday for an organization on whose board I serve. It took me all of 45 minutes. And I ‘met’ some absolutely lovely people. Sometimes I left messages, and a couple of folks even called me back!

Personal notes today are rare gifts; they stand out.

A hand-written note is the gold standard, which encourages you to keep it brief. Right?  So pick up your pen and some simple note cards (or use your organization’s stationery), and begin! People will be bowled over you took the time to write out a warm and friendly personal note!

If (and only if) your handwriting is genuinely illegible you can use your computer and print the thank you out. But at least be sure to add your own signature in ink. Even the addition of a heart or smiley face couldn’t hurt. You don’t want this extra thank you to look like a formal donor acknowledgment. The donor already received one of these. Anything handwritten or hand-drawn is worth the extra effort.

This is a time when over-the-top is appreciated.

Even in ordinary times, the best thank you notes don’t begin with ‘thank you.’ If you want to stand out, think about how to make your note exceptional by speaking to what the donor is accomplishing and/or how rare they are to appreciate the importance of giving to you at this time. Everyone responds to praise.

A Canadian study by donor-centered fundraising expert, Penelope Burk, found 45% of donors reported it was receiving an exceptional thank you letter that inspired them to give again. 40% of respondents said they had received at least one thank you letter in recent memory they would describe as exceptional. Its “warm, personal tone making the letter feel like it was written just for me” was cited most often. So don’t let anyone tell you these ‘extra’ thank you notes are not important!

The best letters are person to person. When you make it collective it loses its punch.

The beauty of a thank you email is it’s quick. For you. For your reader.

Once you have a template prepared, you can easily tailor it (i.e., personalize by using the donor’s first name and the purpose for which they expected their gift would be used) and get it promptly out the door. Since this is an ‘extra’ thank you, in addition to anything the donor may have already received via your automated processes, it doesn’t need any bells and whistles.  In other words, graphics, photos and/or video links aren’t welcome here. Why? Because you don’t want to have to worry about how the email will display on mobile devices. 61.9% of all emails are now opened and read on mobile devices. If your email isn’t optimized, 70% delete the email immediately!

You want to assure the email is opened.

People look first at the subject line; then often they look at the preview pane (the latter lets users peek at part of their emails to decide whether or not to open them. Perhaps over 50% encounter emails this way). Spend some time crafting your messages here, because an un-opened email is a waste of time.

You don’t want this pure expression of gratitude to have even a whiff of solicitation.

In other words, don’t include a donation button or link. Don’t say “more help is needed.” Think of it as an email you’d dash off to your Mom or Grandmother after they sent you a gift. You wouldn’t say “thanks so much for the hand-made mask, but you know I really need more so I have one for each day of the week.” Sadly, some donor acknowledgments come across this way.

How Many Donors Should You Tip?

As many as you can manage.

Every organization is different.

Have you “tipped” any donors? How, and what happened as a result? Let me know in the comments below!