This article was originally published during the 2008 financial crisis. It has been republished here with permission from the Panas estate.

It’s a puzzling phenomenon. It may seem counterintuitive, but in tough financial times people actually give more. But they give to organizations they care greatly about. Those organizations that have done an outstanding job of thanking them properly and often, and where they feel their gift has been celebrated and used effectively. Donors become more selective in tough times. They choose organizations that demonstrate how much the donor means to those the organization serves.

There is no “perfect moment” to raise money. There is no such thing as a time when all possible factors are in your favor.

But there are some surprising and significant advantages to raising funds in tough times.

This may surprise some. But we find that economic conditions are not a prime factor in the success of raising funds or in a campaign. Philanthropy has been one of the most stable factors in the economy, year in and year out. From the time we’ve been keeping records, philanthropy has increased steadily, each year more than the year before.

In fact, since 1980, we have experienced five “official” recessions— and still, philanthropy has continued to grow. Each year more than the year before.

The plain fact is in good times and bad, Americans give to worthy causes. But when times are difficult, they seem to respond with even greater dedication, generosity, and a genuine sense of sacrifice. They will allow nothing to interfere with their fervor in supporting worthwhile causes.

The Campaign that Never Was

Through 24 Tax Revisions since 1980, a Standard & Poor Index that looks like a roller-coaster, and economic peaks and valleys— Americans support those organizations they believe in. They have never failed.

If you do not build, or go forward with your project— the services of your organization will be less than you believe they should and could be. Less than what they must be.

Waiting for precisely the right time to raise money, and keeping an anxious eye on the economic barometer, is not the prudent answer.

What is truly good stewardship is taking the time and thought to prepare properly. Creatively conceived, carefully prepared, and tightly organized fundraising programs and campaigns win— in both good times and bad.

Not One Day Before

Here’s what you need to remember. If you are not properly prepared, your fundraising program is almost certainly doomed to failure. In good times and bad.

There is one way to be certain to find out if you’re ready. It is fail-proof. You can be assured there will be no surprises. 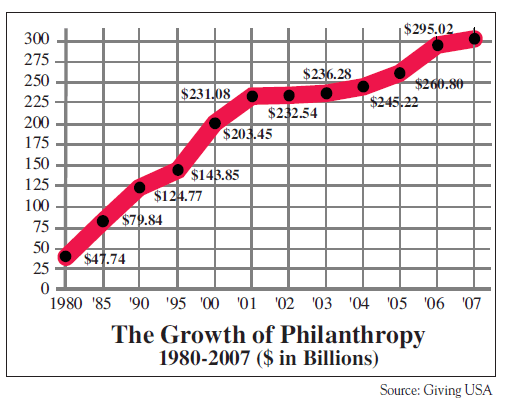 Conduct a feasibility study to determine your state of readiness. All fundraising firms of quality offer and assist in this service before undertaking a fundraising program.

The study will evaluate accurately your readiness and determine the amount you can raise. The assessment will help you to design a strategy that assures the success of your program.

Our firm’s research people have looked carefully to determine if there is some relationship between the fluctuations of our economy and the results of fundraising. There’s no correlation.

We hear it often: “People are worried about the future . . . the times aren’t good— and they won’t give.” But we have been hearing some trustees making those same observations for the past 40 years that the firm has been in operation. When you look at the data, it appears quite clear that giving is not based on the economy.

Here’s what we find. As the economy rises, giving rises with it. But seldom as fast as the economy. Now here’s what’s interesting. When the economy declines, philanthropy continues to increase. But at a slower pace.

Nonprofit philanthropy continues to grow even in the most difficult of economic times. It has since we’ve been keeping track.

This will surprise you. In boom periods, Americans give a lower percentage of their income. But in tough times, they give more. That’s right— more !

Tough Times Can be Good

Get out your highlighter because what comes next is most important of all. The best time to raise money is when you are prepared. Nothing else is of greater significance. No other consideration is as important.

Here’s what is most fascinating. There are actually important advantages to raising funds in tough times.

People give to causes that are worthy. Philanthropy has grown each year, the new year more than the one before. But in difficult times, people dig deeper and give more to the organizations they care most about. All of the evidence points to this.

It is quite clear that difficult times emphasize the urgency and drama of compelling needs.

Obviously, we don’t suggest you wait for hard times. We recommend only that you be prepared. And when you are— you’re ready to launch a successful campaign and raise significant funds. In good times and bad.

Founding Partner at Jerold Panas, Linzy & Partners
Jerold Panas was Founding Partner of Jerold Panas, Linzy & Partners—one of the nation’s most highly regarded firms in the field of campaign services and financial resource development. The firm has served over 3900 client-institutions since its founding in 1968. Jerold Panas was professionally involved in fundraising and financial resource development for over forty years. He was idea-rich and high energy.