Thanks to the recent research conducted by the IU Lilly School of Philanthropy and Martz & Lundy we have a reliable forecast of how many dollars will flow into United States nonprofits over the next two years. You can read The Philanthropy Outlook: 2015 & 2016 here.

The forecast is truly positive news and should provide even more momentum for every charity involved in fundraising of any nature! This outlook should be shared with every member of your nonprofit’s internal team, as well as the board and current donors. Optimism is contagious!

Two Major Reason for the Upswing in Giving

There are two underlying factors providing the most influence in this positive outlook. They are of no surprise when one considers what drives charitable giving.

The two reasons are:

Notice the latter portion of the second reason. The higher the net worth of nonprofits, the higher the level of sophisticated fundraising techniques leading to greater results. This, combined with the extra dollars available for discretionary uses (such as charitable giving), provides the foundation of these optimistic projections.

These annual increases are the sum of various key segments of giving. We will explore each of the key segments in this summary where slight differences in the percentage of growth emerge.

The largest segment by far, and the one which touches just about every charity who raises monies in some manner, is individual giving. This comprises around 70% of all giving. Some folks would say it is nearly 80% when you combine in legacy giving and its nearly 10% of giving. 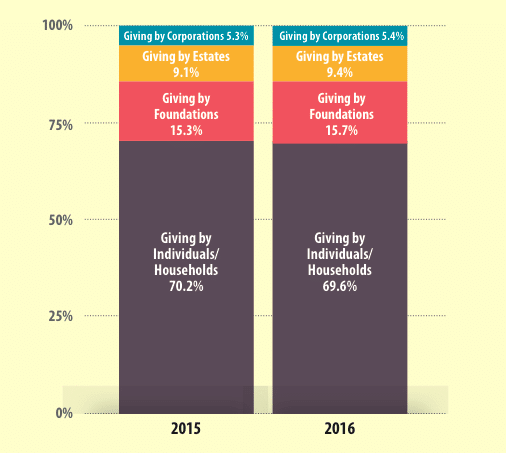 Breakdown of Increases by Segment

In order to compare how your results are for each segment in 2015 and 2016 your data will need to be grouped by these same exact segments. Then, your results from each segment can easily be shown in direct comparison in a bar chart for your management and board.

Here are the increases by segment:

The subtle differences and changes from 2015 to 2016 are explained in the full report and are well worth noting. Most of those same factors will influence your results.

Moving Forward Armed with this Forecast

I feel like I would be remiss if I did not point out the large uptick in the forecast for giving by estates in 2016. Since we are early in 2015, this gives you both the reason and the time to create your own planned giving program and committee prior to then. Such efforts should yield large strides forward in this key area.

We all know and have seen first hand how positive economic forecasts move our American stock markets. An upbeat forecast raises enthusiasm and expectations, which literally drags the actual market results upward in most situations.

Please allow this wonderful forecast and to do the same for your fundraising results!