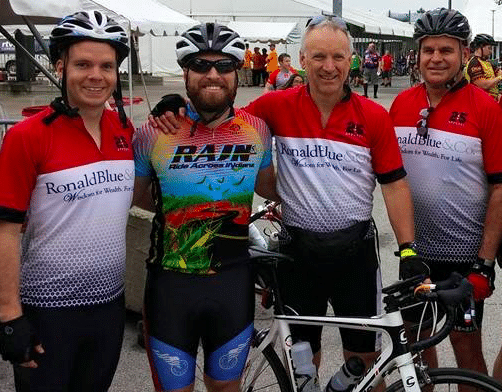 If you believe that engaging your donors and cultivating major gifts is the most direct route to long-term sustainability for your nonprofit, you’re right.

And if you believe that throwing special events is an expensive, time & resource consuming effort, which can be an inefficient way to raise money, you’re right about that too.

But imagine if your signature event could take on a higher meaning, and accomplish multiple objectives, like:

…which would be in contrast to the approach that goes something like:

By combining the fine art of donor engagement with the power of peer-to-peer (P2P) fundraising, you can create this “triple dip” of fundraising success, and turn your signature event from an exhausting annual ritual into the cornerstone of your major gift/sustaining donor strategy.

I’ve seen the power of P2P up close and personally in my own experience as a donor for the American Diabetes Association.

ADA’s signature fundraising event is called the Tour De Cure. It’s an annual bicycling event, held in about 50 cities across the country, where riders can show up and ride a few miles, or in my case, do the “century ride” of 100 miles. (Ouch!) Every spring, I train over 1,000 miles on my bike to get ready for my big 100 mile ride. It’s a great event that generates gross revenue of nearly $1 million every year for diabetes research and advocacy.

Here’s how they do it – how they “triple dip” their way to fundraising success.

First, they throw a great event. It’s well promoted, well managed and well supported. In our case, we get to use the Indianapolis Motor Speedway as our headquarters, which is extra cool. You can ride your bike on the speedway track, or on a road course outside the track, or both. It attracts about 1,400 riders of all levels, each of whom donate and/or raise a minimum of $200 in order to participate. ADA also gets plenty of high-profile sponsors – mostly organizations that care about diabetes, or about cycling, or both. So they generate tons of cash “at the gate” through registrations, donations and sponsorships.

Next, they multiply their effectiveness through a vigorous peer-to-peer strategy, which challenges every rider to raise money for the cause from their friends and families. The fundraising culture at ADA has generated a lot of competition among riders, and among teams of riders, to see who can raise the most money. Many participants are not even strong bike riders, and the competition often centers more around the fundraising than the physical aspects of the cycling event! So they rake in another ton of cash, mainly from donors who are not participating in the event, but are sponsoring one of the 1,400 riders. While the minimum amount required to ride is $200, the average rider generates more than $450 each year. A pretty strong showing!

You can easily launch your own peer-to-peer platform using programs offered by companies like Qgiv, Bloomerang’s peer-to-peer product partner.

But ADA does not stop there.

The fundraising cycle does not end when the event is over. More accurately, it’s just beginning.

As our friend and Bloomerang Head Communications Coach Tom Ahern likes to say, “your engagement and retention effort begins with the thank-you.” ADA’s emphasis on cultivating their donors and fundraisers has two big follow-on impacts after the Tour is over for the year. First, they make sure that their best donors and fundraisers will keep coming back; and second, they get their best fundraisers to generate ever-increasing amounts of revenue year-over-year.

By doing this, they took a run-of-the-mill rider like me, and turned me into the #7 overall personal fundraiser in the state of Indiana (out of the 1,400 riders). While I was once a guy who just wanted to sign up and ride, I am now worth (including the money I’ve raised and the money raised by other riders whom I’ve recruited to our team) more than $8,000 per year for the Indiana ADA Chapter. That accounts for nearly 1% of the overall fundraising take for the event. That makes me feel like a big deal!

They did this by practicing what we preach here at Bloomerang: the art of “donor engagement.” Here’s how:

Back in my first year of riding the Tour De Cure (2012), I didn’t raise a ton of money for the Tour. I really only wanted to ride. But nonetheless, the ADA staff noted my efforts, and a few days after the event I got a call on my cell phone from the ADA Executive Director, thanking me for riding and for the money I’d raised, and told me she hoped I would come back next year. I was pretty impressed by that! So just like that, with that tiny act of donor engagement, they had already prepared me to be a repeat donor the following year.

They also sent me some routine communication after the event and throughout the year, occasionally reminding me of my fundraising success from the previous year. This also had the effect of putting subtle pressure on me to raise my goal next time… which I did – and raised over $2,000 in 2013, $3500 in 2014 and a team total of $8500 last year! They kept in touch with me, inviting me to various recognition events, always thanking me and buttering me up for the next round. So I was beginning to feel like minor royalty there! And now, not only am I donating to the cause, I’m also raising money from my friends, I’ve recruited additional riders, and I’ve done a lot of evangelizing about their mission. What a great deal for them!

There’s a huge amount of effort and expense that goes into throwing a Tour De Cure event. If they had to rely strictly on the event revenue, I don’t think it would be worth the trouble. But because ADA has created a true relationship with me and the other riders, we feel like investors in the cause, not cash cows. And by throwing a great event AND practicing the all-important art of donor engagement, they win on three levels – they get event revenue, they get secondary revenue from thousands of peer-to-peer donors who support the riders, and the realize an extremely high rate of donor retention and donor upgrades each year, which keeps more and bigger donors coming back year after year .

So if your event strategy is to just survive your big event, and hope you made some money, you’re missing about two-thirds of your opportunity. Use peer-to-peer tactics AND donor engagement strategies to get the “triple dip!”