In “Who Gets to Be in Your Nonprofit’s Major Donor Portfolio” we looked at how to qualify a major donor prospect to be in your portfolio. Today we’ll look at how you’ll allocate your limited time among all these qualified prospects.

First, a reminder: One full-time person can only handle cultivating a portfolio of 150. Maximum. Assuming they do nothing else. If you have a major gift officer, this will be their job. Their only job. They’ve got just 40 hours/week, minus the weeks they’ll be on vacation, holiday, or sick leave (roughly 18 days/month). And you will not ask them to do research, write grant proposals, coordinate events or write annual appeals; otherwise, they’ll have even less time.

If you do not have the luxury to have one full-time person dedicated to major gift fundraising, figure out how much time you do have. Also, consider the staff resources you have available to you. Who has the ability to represent your organization and make fruitful connections with donors? Who would donors enjoy meeting with? Perhaps you’ll need to spread your portfolio across a range of people (e.g., the executive director, associate director, development director, and annual giving manager). Even working together, 150 prospects may be too many to handle.

If you can’t fit every qualified major donor prospect into the amount of time you’ve allocated to major gift development, you’ll want to begin with your very best donor prospects.  Actually, you’ll want to spend most of your time with prospects likely to yield the most successful outcome regardless of how many staff you have on the job. It just makes good economic sense.

The best way I know to hone your portfolio is through tiering. Some version of the Pareto 80/20 Rule applies: the top tiers will likely account for the lion’s share of your satisfaction.

How to Tier Your Donors

I like to visualize this as a cupcake tower. Who doesn’t love a good cupcake?

The formula differs slightly for every nonprofit. It may be 80/20, 90/10, 70/30, or some variation. The point is you’ll have a small fraction of major donors who give you a large proportion of your contributed revenue. In the graphic below, I suggest you spend 80% of your time with your top two tiers.

The cupcake at the top is the yummiest. You want to spend in the neighborhood of 50% of your time here; then 30% with the next tier. You want to take the time to really enjoy these cupcakes.

You’ll also be able to get some enjoyment from the lower tiers – but not as much. Renewing mid-level and major gifts at the same level they’ve always given is the easiest thing to do, but you don’t want to get stuck there because you’ll never grow. In fact, if you try to over-indulge on the bottom tiers you’ll just get sick. It’s too much. The bottom level tier belongs in your regular annual giving track.

Tier folks into A, B, and C groupings based both on (1) capacity to give and, just as important (if not more important), (2) how close they are to being ready to make a major gift. You should be able to figure out the former based on wealth indicators of which you’re aware. Generally, you’ll do this through your own research, by asking your board and closest donors what they know, and/or by purchasing donor analytics or predictive modeling. You’ll be able to figure out the latter based on their pattern of giving (e.g., how recently they’ve given; the pattern of increases; how frequently they’ve given, and other types of active affiliation and engagement with your cause.

Another way to think about this is the Goldilocks story. You don’t want more folks than you can fit on your plate. You don’t want too few to make a satisfying meal. You do want the ‘just right’ amount you’ll be able to handle with grace. Here is how to proceed: 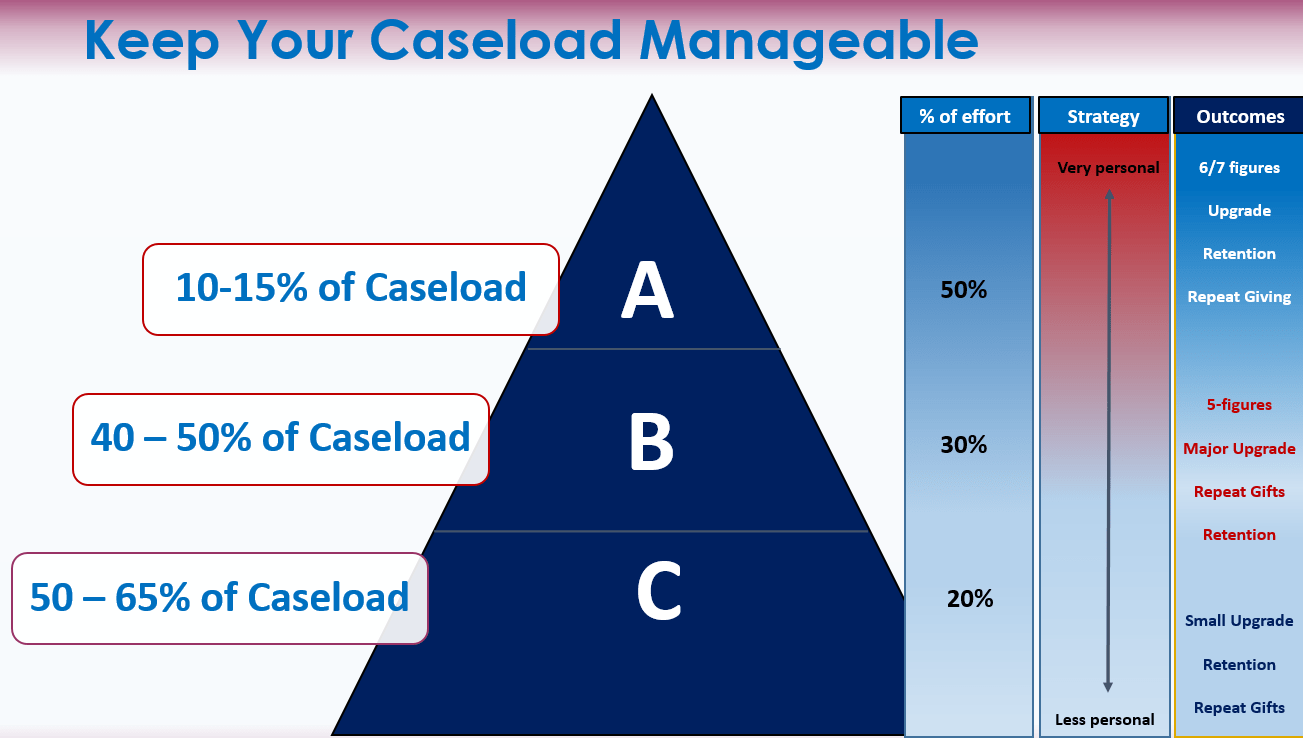 A — Level A strategies will be the most individually tailored, up close, and personal. That’s because these will be passionate gifts.  It just makes good economic sense to put your limited resources where the most promise lies. These prospects will have the highest revenue goals and should make up roughly 10-15% of donors in your portfolio. The economic value of these donors will approach 50% of your goal.

B — Level B strategies will strive for retention and significant upgrades. These donors will make up roughly 40% of your portfolio. Endeavor to move some of them to A level over time. Or see if they’ll consider multiple major gifts for different programs.

C — Level C strategies will strive for retention and smaller upgrades. These donors will make up roughly 50% of your caseload, yet only 20% of your revenue goal. They are loyal, steadfast, and true, but perhaps not capable of making much larger gifts right now.

Target an Ask Goal for Every Donor in Every Tier

You’ve got a fundraising goal, right?

This means you need to raise a specific amount of money from the donors in your portfolio. Don’t just ask them for random or vague amounts. Ask them what you need to get the job done. Donors will actually appreciate this. They don’t want to give a bunch of money that ends up going down a black hole.

Donors want to give to success. It’s your job to tell them what success looks like. In monetary terms.

Build an Individualized Cultivation Plan for Each Donor

This wasn’t a major donor program; it was a donor renewal program. As a result, most donors gave precisely what they’d given the previous year. This wasn’t all bad, of course. High-level donors were retained, not lost. But so much money was left on the table!

Don’t just throw a bunch of ‘touches’ and ‘moves’ at your prospects. Work with them. Once a donor is qualified for your portfolio, the next task is building a relationship. No cold calls. No cookie-cutter plans.

Spend time thinking about what moves you’ll measure, trying to reduce your pipeline to the smallest number of moves possible. Measure only activities that get you closer to a gift. Sending a holiday greeting card won’t help much. Setting up an in-person meeting with the director will.

Recalibrate as You Go Along

As you continue with moves, you may discover the donor still doesn’t say yes.  Or says yes at a level that doesn’t merit keeping them in Tier A or B. Recalibrate When things start to feel they’re not working, move folks to another tier.

Major Gifts is Your Most Cost-Effective Fundraising Strategy

If you focus your effort strategically, you’ll reap the rewards.

It’s worth taking the time upfront, through proper identification, qualification, and tiering, to assure your efforts aren’t squandered. These steps will set you up for success when it comes to the next steps in the process: cultivation, solicitation, and stewardship.

A viable major donor prospect is a terrible thing to waste.

Want to learn more about cultivation and asking?

Check out Making Effective Donor Asks. You’ll learn a model of permission-based asking that assures no encounter with your donor is ever wasted. You’ll also gain a huge comfort level that’s extremely liberating.

Download our free guide of 42 Questions to Ask Major Donor Prospects Before You Ask for a Gift to inform what questions you should ask to get to know and identify a major donor prospect before you make the ask.