Among the myriad data points from the Panel Philanthropy Study (PPS), the chart below illustrates the average and median giving amounts for different household income groups: 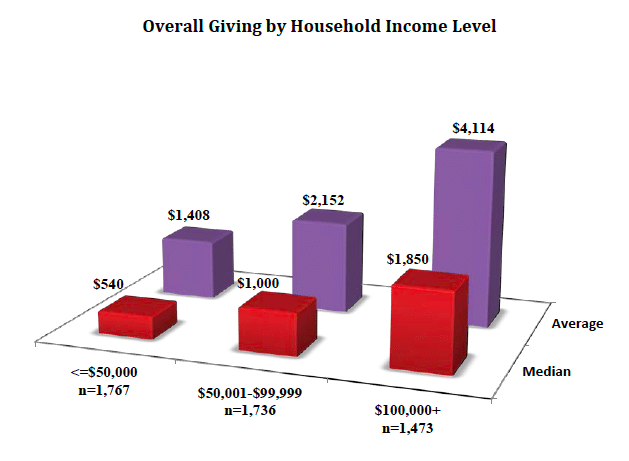 But what do these figures mean for the Lifetime Value of donors?

Simply stated, Donor Lifetime Value is the total net contribution that a donor generates during their lifetime within your database.

In order to calculate average Lifetime Value from the chart above, we must first calculate the average gift amount made to each supported cause. To do so, we will take the median giving amount and divide by the (assumed) number of causes supported per income group (the average amounts in the chart above are a bit misleading, due to some very large gifts, so we will divide with the median amounts).

The median giving amount per income group annually in the chart above is:

Let’s assume the three levels split their giving between three causes, then four, then five respectively. The average annual gift in each income group would be:

This certainly shows how special even a $1,000 annual gift can be for most charities.

Using those assumptions, we can create Average Lifetime Value amounts for each of the three household income groups:

The entire purpose of the chart above is to raise awareness regarding the real impact of individual donors within each group.

Such lifetime values warrant much more personal attention than the typical annual donor at the levels below $400. Detailed donor stewardship and communications plans are critical to maintaining these donors over the long-term.

Do these illustrations create any new attitudes on the part of you or your team? Would considering Lifetime Value lead to more encompassing communication and follow-up plans? If so, please share them in the comment area below.