As a volunteer communications director for a nonprofit (and the spouse of a full-time one) I know how exciting it is to get an interview request or a response to a press release from a media outlet. Whether it’s the local morning news program or 60 Minutes, going on TV can be an exciting opportunity that will pay dividends if you properly prepare and follow-up. Here are a few things you can do to ensure your television experience goes as smoothly as possible. 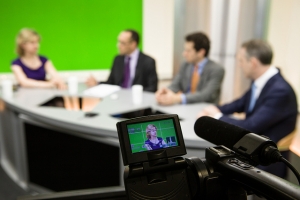 As you are talking with the produce or reporter, they may use technical terminology that you aren’t familiar with to describe the type of story or “package” they want to produce.

There are two basic types of television new stories:

Understanding what kind of package it will be will help you prepare. For example, you might be invited to the television studio for a live interview. Or, a crew may come out to your location or event and record, then edit and broadcast at a later date. For example, if the producer or reporter says “live remote” they will be coming to you and shooting live. If they say something like “feature story” you will probably be part of a more produced and polished story that airs a few days after the video shoot.

Know the air date and time

Live remotes are typical on weekend mornings, since that’s when a lot of events occur. A crew may stay on-location and give multiple reports throughout the morning. In-studio interviews and recorded/edited features typically air once or twice on weekday evenings.

Make sure you know when the story will air and how often. It’s likely that you’ll get multiple chances to view or record the piece. The producer will likely give you a window, since news broadcasts are fluid and can be impossible to predict the exact timing of stories. Broadcasts are typically broken up into half an hour and hour segments. For example, you might be told that it will air during “the 6 o’clock hour” – meaning it could air anytime between 6:01 and 6:29.

Be sure to have a volunteer set a recording on their DVR. This will let you reuse and repurpose the story later on your website. The TV station will most likely not give you a recording. Once you get an estimate on when it will air, have your volunteer record that entire day’s broadcast to be safe.

When you’re first talking to the reporter or producer, you’ll find that they already have an idea of what kind of story they want to produce. It’s as important for you to coach them as it is for them to coach you. They likely won’t be an expert on your organization or your mission, and interviews can easily go off-message. Make sure you both have a clear understanding on the talking points and the goals of the story.

Choose an interviewee and prep them

Once you know what the story will be about, it’s time to choose who will be interviewed. It’s important to select someone who is enthusiastic, well-spoken and confident. Your Executive Director or Founder is an obvious choice, but you might want to tag-team it with someone you serve. If the shoot is on-site for an extended amount of time, be sure to line up several people to be interviewed and make sure they are fully prepped.

Map out your b-roll

If the shoot is on-site, the crew will likely want to collect shots around your office or event. These non-interview shots are called b-roll – they can be shots of people working, your facility, your guests or the people you serve, etc. Make sure you can direct the cameraperson to the best opportunities for b-roll. Think about what you will be discussing in the interview, and pick out shots that visualize those items.

At the end of the interview, the reporter will likely ask you “how can people find out more?” This is an absolutely critical moment – one that can make or break the entire story. Be sure you know exactly where you want to send viewers. Is it your website? Is it your hotline number? Is it an event happening later that day? Have absolute clarity on this call-to-action, or else you’ll find that the story didn’t generate much activity. If it’s your website, consider sharing a unique URL that was created just for this occasion. That way, you can measure exactly how much traffic that news story generated.

Once your call-to-action is defined, be sure to send all of that information over to the producer. Also include basic information about your organization: full name, address, phone number and a brief boilerplate description.

It may be appropriate for the producer to include your logo and organization name somewhere within the story. Even if they don’t ask for it, be sure to send them a high-resolution version of your logo prior to the shoot. If they don’t get one from you, they might grab a low-res version off of the Internet somewhere, and it won’t look the best.

You’re going to be on TV!

This goes without saying, but you should try your best to arrive at least 30 minutes early to the either the studio or the location of the shoot.

If the story is live, they’ll likely be teasing it all throughout the broadcast – and it will be quite embarrassing for your organization if you’re late or don’t show up at all.

If the story is on-site, arrive early to scope out possible shoot locations and clear the area (or collect people to be in the background). The reporter will likely lean on you to decide where to do the interview and what b-roll to collect.

In addition to arriving early, be sure to bring along another employee or volunteer who isn’t involved in the shoot. They can take behind-the-scenes photos and videos for use on social media and your website. Plus, they’ll have a lot of fun hanging out at a television station. You could even invite a donor as a fun way of showing your appreciation to them.

Expect to get bumped

If a breaking news story occurs, it’s possible that your shoot will get bumped and possibly canceled outright. Productions like yours are meant to fill time when there isn’t a lot of breaking news to cover, which means that your story is somewhat disposable.

It’s important not to get discouraged or show any animosity to the reporter or producer. If you do, you might not get back on that station for as long as they’re employed there. Be gracious and keep the door open for a later shoot.

If you were able to record the story or get a recording the from the TV station, you might want to upload to YouTube or post it on your other social media accounts or your blog. It’s a good idea to ask the producer or reporter for permission to do this. They likely won’t have any problem with it, since it helps promote their channel. Some stations are pretty good about uploading stories to their own YouTube channels. If so, you can probably just distribute that link.

Either way, be sure to get the entire story transcribed. You can repurpose the text in a lot of ways – a full blog post, individual quotes on other pieces of collateral, etc. Plus, if you post the video on your website, those with hearing impairments will appreciate the transcript.

Send a thank you note

Maintaining good relationships with reporters is a key aspect of your organization’s PR efforts. After the broadcast, be sure to send a handwritten thank you note to the reporter, producer and crew. It will make a big impact.

If you’re call-to-action included a URL or phone number, check to see if traffic or call volume increased after the broadcast. If you’re having an event, ask attendees how they heard about it. Hopefully, you’ll hear them say they saw you on the news!

Getting your organization on TV can be a real coup in terms of exposure, but don’t be discouraged if the story doesn’t drive any hard results, especially if it’s recapping something that has already happened. Being featured in the news will boost your confidence, further validate you in the eyes of current supporters, and energize your staff and volunteers. Don’t forget to have fun during this whole process!

What about you? How have you made the most of out of a television appearance? Let me know in the comments below!