Asking for Advice and the Remarkable Power of Pre-Suasion I’m sure you’ve heard it before:

“You want advice, ask for money.  You want money, ask for advice.”

And if you haven’t heard that old saw before, now you have. And it’s worth taking seriously!

This book is chock full of remarkable examples of the ways in which people are pre-disposed to make decisions depending on conditions that were set up before they considered the decision.

Cialdini is a social scientist. He doesn’t just make stuff up. He’s in the business of creating experiments that test assumptions about how people behave and why.

Now, Robert Cialdini is not in the fundraising business – at least not that I know of. And he doesn’t focus his work on charitable giving. But many of the ideas and conclusions he describes in his book seem to me to apply to fundraising.

And according to Cialdini, asking for advice really does work!

I work helping people get ready for capital campaigns. That’s the kind of fundraising that relies extensively on big gifts.

In the capital campaign coaching that I do, I find that most people assume that they shouldn’t approach their largest prospective donors until they have a very good and clear idea of what they want to ask for.

You can understand that. They don’t want to look foolish or unprepared. They don’t want to seem incompetent or sloppy. They want their largest donors to see them as being super-capable and organized. As a result, they often put off making contact with the very people who can make the biggest difference in their campaigns.

In Fact, You Should Ask for Advice Early On

I encourage my clients to do just the opposite. Rather than waiting until their plans are fully formed, I encourage them to ask those all-important donors for advice long before they are fully sure of what they will be asking for.

That’s a hard lesson for people to learn. The anxiety of looking incompetent in front of people who have such very real power and influence over their success is enormous.

But I’ve found again and again that when they can quiet their anxiety and swallow their pride and treat their donors like partners, asking their advice early in the process, the results are remarkable.

And in Robert Cialdini’s book, I’ve learned why.

It turns out that giving advice “puts a person in a merging state of mind which stimulate the linking of one’s own identity with another party’s.”

Put more simply, when someone is asked for and gives advice, that person will feel that they are part of the project and connect more fully.

Note that, according to Cialdini’s research, that togetherness state of mind does not happen when you ask someone to judge or evaluate something. But it does happen when you authentically ask for advice.

Here’s What Happens When Someone Feels They’ve Been Involved

Three things happen when someone feels that they have been involved in creating something.

* I’ve taken some liberties with this one.

As Cialdini says, “Asking for Advice is Good Advice.”

When you ask someone for advice in the early stages of a project, when their advice might really matter, you “pre-suade” them to give.

Be Honest. Do You See Donors as Pockets or Partners? 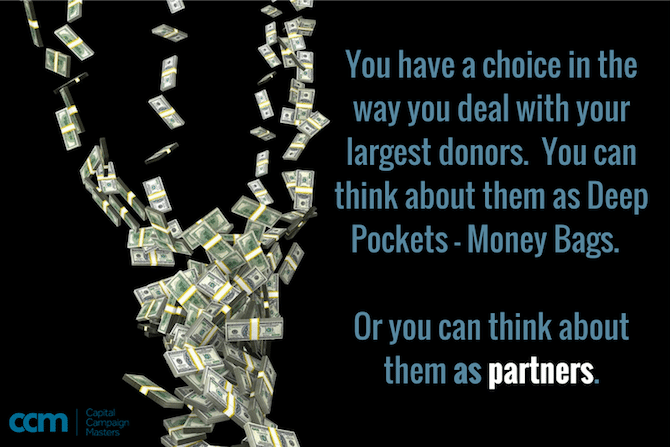 They do have the potential to make a big difference in your organization. And while you won’t want to bend to their desires if they don’t fit your mission and your organization’s direction, you will be richly rewarded if you make it a point of authentically asking for their advice.

Ask for advice and you’ll not only learn some important things, but you’ll put them in a “merging state of mind.” And that may well help pre-suade them to give generously to your cause.