Are You Leaving Contributions on the Table because it’s a Pandemic? 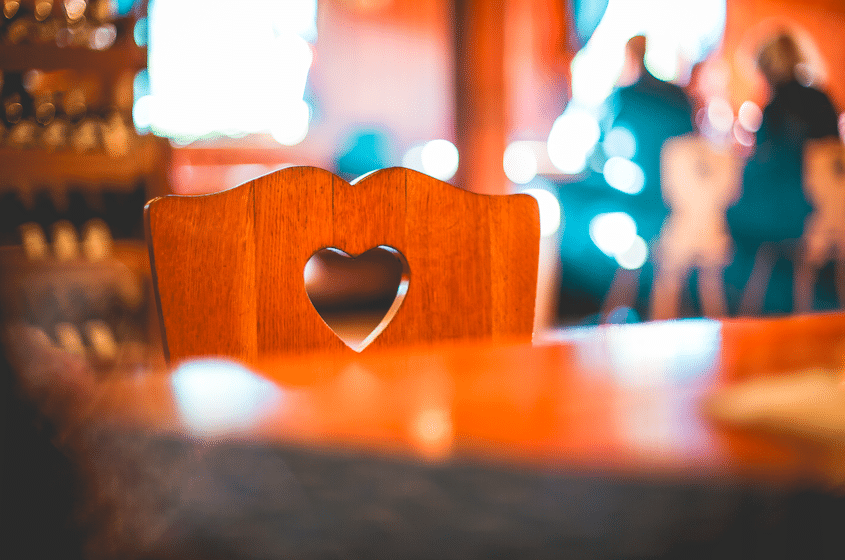 The good way to avoid leaving charitable contributions on the table is simply to ask for a gift.

The best way, during a pandemic, is to relate that specific ask to the current zeitgeist.

In other words, get inside your donor’s heads and connect what you’re asking for to how they’re feeling, why they might want to make a philanthropic gift right now, and where they’re wanting to help.

Don’t assume you already know what they think and feel.

You know what they say about the word ass.u.me, right?

Get Inside Donors’ Heads

If you’re leery of asking for gifts during a time of mass uncertainty within our society, that’s not unusual. A lot of your peers feel exactly the same way. As a result, too many nonprofits are not asking nearly as much as they should right now. And they’re falling back on the idea they’re being compassionate since they assume their donors have their own worries.

But making it ‘noble’ not to ask is a real cop out. It’s an excuse not to do the work that’s needed to keep your mission afloat. Worse still, it will leave those who rely on you out in the cold. People need you to do what you do – even if in a somewhat different form right now. If your donors didn’t see your value, they’d never have supported you in the first place.

If you’re reluctant to ask aggressively it should come as no surprise you’ll get less than aggressive fundraising results. Gifts may trickle in, but you’ll receive nowhere near the amount you could have generated had you swung bigger.

There are two ways to prove people want to give:

How do you know people might give were you to ask? How can you persuade your ‘powers that be’ you should be making more face-to-face (virtual) asks and sending more mailed and emailed appeals?

Time to Review the Research

There are two types of research from which to borrow: qualitative (what people say) and quantitative (what the data reveals). Right now a fair amount of qualitative research is available. Some you can ferret out yourself; some is reported and I will share it with you. There is also beginning to be more quantitative research as we end calendar year Q2 and data becomes available.

So far, the news is good. Some of the headlines you’ll see are dismaying, but if you read the data and fine print, donors are not abandoning ship in droves. If you’re the fundraiser in your organization, it’s important you search out the facts. That’s your job! Because it’s likely your board, executive management and other naysayers are only seeing the headlines. And they’re using them to justify a decision to cut back on fundraising now – because it’s something with which they’ve never been comfortable.

Don’t let fear run the show. If you do, you’ll miss out on an abundance of philanthropy being given to sustain organizations people value. I’m guessing yours is among them.

1. Examples from Other Nonprofits

Take a look at organizations running exceptionally successful campaigns during this period. While this information may be anecdotal, if you report back to your leadership on the success of nonprofits they respect this can go a long way.

Find a campaign you admire (maybe an appeal you personally receive); call the development director and interview them about their results. Imagine being able to say:

“A, B and C independent schools in our city all reported raising more this year than last year through a combination of virtual events, virtual major gift fundraising and biweekly email appeals. I also spoke to D and F, who cancelled their Gala, delayed their usual spring appeals and are waiting until fall to ramp up; their fundraising is down. Based on these results, I recommend we plan to execute on some of their best ideas.”

You can also look at examples from internet searches. I find these less persuasive with leaders because it’s too easy for them to say “Well, if we had puppies we could do that too.” That being said, allow me to share some sample recent fundraising campaigns reported by Classy (e.g., The San Francisco Ballet; Another Round Another Rally; Upaya Social Ventures; and Hope for Haiti).

As reported by Jeff Brooks, an informal poll on Facebook of members of The Fundraisingology Lab shows a whopping 87% of folks raised more money this coronavirus spring than last spring. Well over half reported they were way up. Only 9% were slightly down, and 4% remained the same. Granted, these folks are probably among the best fundraisers as they’ve self-selected to participate in this group. However, doesn’t it make sense to borrow from a successful group like this? A variety of investment services, CRMs and databases are reporting on numbers of donors and dollars from the range of nonprofits using their service. Notably, Fidelity Charitable recently reported giving from donor advised funds they manage is up 28% from last year. Giving to human services was especially robust, while giving to other causes remained constant. It did not suffer. You can download a free report with state-by-state data.

In Philanthropy Rises in Pandemic as Donors Heed the Call for Help the New York Times reports on a study conducted by Community Foundation Public Awareness Initiative in which 32 community foundations report an average 80% increase in donations from DAFs they manage, March to May, compared with the same period last year.  Granted, DAF donors may be more generous than other donors. Still, the results are impressive. If you have DAF holders among your constituents, and you aren’t asking for gifts, guess what?

A report from Merkle RMG on how the pandemic is impacting fundraising found revenue from direct mail increased 29.5% year-over-year (February 1 through June 14, 2020) based on gifts they processed from 135 nonprofits. Numbers of charitable contributions were up 4.9%, but average gift size was larger. And as of the report’s publication, giving continues to be trending upwards. This is still the ‘bump,’ not the ‘slump.’ It makes little sense to wait to ask until the trend starts to turn downward.

Donors will give to the charities that do ask.

Three different, highly-respected public-opinion surveys this spring found 79% – 91% percent of U.S. adults will maintain or increase their giving this year despite our national crisis.

Now, thanks to the folks at Blue Frog Fundraising, more is known about how donors feel about giving in response to the current pandemic. In the recently revealed Coronavirus Research Findings: What do donors think now? they focus on what donors have told them about how their approach to giving has changed. Or hasn’t. If you click the link above you can listen in as they share their findings in a webcast. Or just read if you prefer.

BOTTOM LINE: If you don’t ask people to give, you’ll leave money on the table.

When it comes to current attitudes about charitable contributions, most people right now see it as a good thing. They see fundraising as a good thing too. People are remaining generous, and they want to help. Even if you’re not a ‘frontline’ charity. If they cared about what you did in the past, they still do.

Here are a few statements from donors reported in an article in the New York Times:

These are from donors who stepped up, often more than they usually do, in response to current events.

“What really struck me was what was happening with soup kitchens and food banks — there were these long, long lines that hadn’t been there before. I wanted to give and help in some way.”

“Their whole season was wiped out. It wasn’t that large, but it made a huge difference to their survival.”

“I’m generally shifting away from the biggest organizations. I’m hoping to support groups that would not always get your attention.”

“At the beginning of the pandemic, I did the same thing everyone did: I looked at the stock market and said, ‘Oh, my God. Then I held my nose and said, ‘Forget that — the money isn’t mine anymore. It will do more work out there.’”

There are, again, two types of research you can glean from folks in your own database. Quantitative and qualitative.

Simply run reports comparing giving during a period this year compared with that same period last year. For example, you can run data for March through June of this pandemic period. Look at numbers of donations, numbers of donors, and average gift size. Also break your donor base into segments to see if major, mid-level and smaller donors are performing differently.

Once you know what the giving landscape looks like, take a look at your fundraising landscape. Compare the numbers of appeals you mailed or emailed this year vs. last year for the same period. Do the same for face-to-face and telephone asks. Add in giving from other platforms such as text and social media. In other words, strive for a full, big picture assessment. Don’t stop at numbers of donors and amount raised without determining (1) if this is happening because people have less of a desire to give to you or (2) it’s because you’re communicating with them less.

The easiest thing to do is send a simple donor survey using a free platform like Survey Monkey. An added benefit is donors generally enjoy being asked for their feedback! A Donor Voice study of more than 250 nonprofits found the fourth-highest driver of donor commitment relates directly to soliciting feedback from donors.  Keep the survey brief to assure the highest response rate. Use mostly multiple choice, yes/no or rating on a scale questions to make tallies easy. It’s okay to have one ‘fill in the blank’ where participants write their own comments. These take longer for you to read and assess, but the information you receive can be invaluable. You’ll get greater response if the survey is anonymous, but you can also make giving their name optional (maybe put folks who give their contact info into a drawing to win a prize.) If you do get names, you’ll have additional information you can use to further build a relationship with these folks. Just make sure you enter this info into your database so it isn’t lost.

You can also make random telephone calls to donors or run a virtual focus group on a platform like Zoom. These tend to encourage good discussions, though the qualitative data you generate can be harder to analyze. Focus groups definitely have an added relationship-building benefit, and you can follow up with participants for further conversation.

Closing Thoughts: STOP Leaving Gifts on the Table because it’s a Pandemic

It does no one any good. Not you. Not your donors.

Through philanthropy (“love of humankind”) people can attain their highest level of meaning. Philanthropy gives people purpose. And purpose gives people joy. Your job is to inspire investment through direct, purposeful, and joyful asks that enable donors to enact their values and find fulfillment.

Let me close with this quote from a fundraiser I admire:

“If done correctly, I would say the most donor-centric thing a fundraiser can do is ask a donor for a gift. Why? Because you are allowing the donor to change the world. You can’t get more donor-centric than that.”

And here’s a quote from experts in digital fundraising – which is becoming more important in the current socially distanced environment.

“If you are a fundraiser, by all means: fundraise! Be transparent about how COVID-19 is affecting your cause, your nonprofit, the people you serve. Be honest about your fears for the future, and about how much your donors matter.”

A pandemic is not a reason to stop asking; quite the contrary. There’s more that needs changing in the world than ever.