Even if you’re just a casual Twitter user, you’ve probably seen a tweet or two that made you wince, cringe or even hit the unfollow button.

Don’t let your nonprofit cause the same reaction. Here are seven kinds of tweets that your organization should avoid posting: 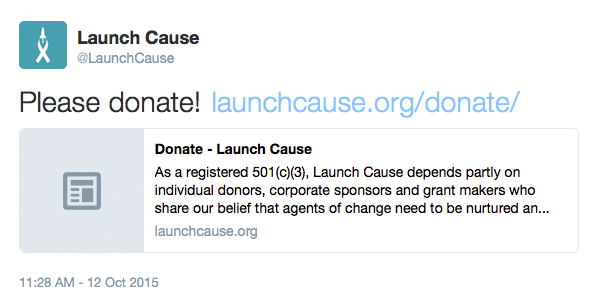 Why? Donate how much? Who benefits?

Asking for donations on Twitter is fine. But how you do it can mean all the difference.

A direct Twitter appeal needs at least two of these three things: urgency, specificity and impact. See how much more compelling that appeal is?

Why are your tweets private? What are you trying to hide?

Sometimes upper management or board members will object to a nonprofit creating a social media account, based on concerns that someone might “talk bad” about them.

Having your tweets set as private is a bad compromise, mainly because it doesn’t address the concern. If a community wants to talk about your brand, they’re going to do it whether or not you’re on that network. So, you can either be part of that conversation or not.

There are two possible reasons for this:

Both are bad, obviously, but #1 should really be avoided.

If you have someone on staff who is really “married” to the brand (like a founder), they should have a separate personal account. It’s just weird to see personal messaging come from a logo, especially if you don’t know who is truly administering the account.

Plus, having a human ambassador (or multiple ambassadors!) can amplify the efforts of the corporate brand account by allowing you to post strategically more often and to different group of followers.

Whyyyyyyyy. Only people already following you will see this!

If you want more followers, try this:

Remember: your tweets are for your current followers. Your content should be for them.

6) Tweets without a photo

You should include a photo with every tweet you send. Period.

According to one study, tweets with a photo are 64%-94% more likely to be retweeted.

But, more importantly, they just make your tweet more visible. Just look how the tweet with an image stands out from the crowd: Be sure to include text with any uploaded image, rather than an image by itself. Not including text is bad for accessibility (a blind person with a screen reader won’t be able to see your images). Also some Twitter clients don’t show images by default, so some followers won’t see the picture unless they click a link.

Also, not including relevant text makes it impossible to search for the Tweet. That means you won’t show up in search results, and it’s harder for users to find the tweet they remembered if they want to show it to anyone else!

In addition, both networks have different styles and cadences. For example, you can get away with posting much more often on Twitter than on Facebook.

What kinds of tweets annoy you? Disagree with anything on my list? Let me know in the comments below!