5 Takeaways From The 2016 Giving USA Report 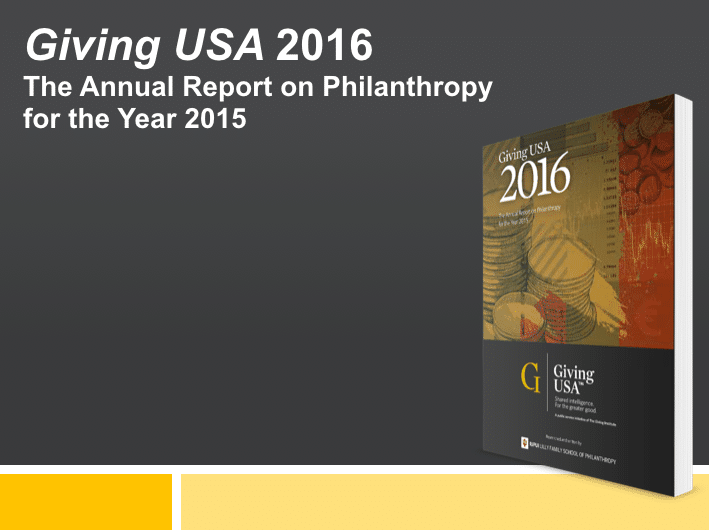 Every June all of us in the nonprofit sector are quite fortunate to be the recipients of perhaps the most comprehensive report on charitable giving in the United States: the Giving USA Report.

Here are my top five takeaways:

1. Giving as a % of Disposable Income Remains at 2%

Every year, I fervently hope that superior fundraising (in particular: donor retention) techniques will cause a stronger movement upward in this critical metric.

The graph below illustrates the trend over the last forty years: 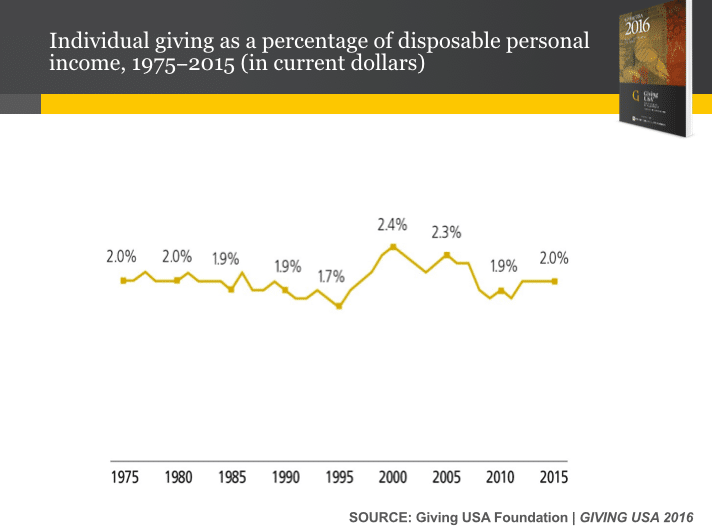 This metric remained at 2% in 2015, which is the 4th straight year at this level.

As one might guess, the chart reveals a strong bonding with the overall economic climate each year.

As Steve MacLaughlin of Blackbaud fame notes in his comments to this Agitator post, this is nearly 3% below what the average person in our country spends on “Entertainment”! My guess is that 5% of disposable income for entertainment has risen faster over the years than the 2% given to philanthropy.

Our goal should be to double the 2 % over the next decade. I truly believe it can be done since many individuals regularly tithe 10%.

This is a joy to see, but as Michael Rosen points out in the same set of comments to The Agitator post above, the rate of growth is slower than the year before. Before we yell “naysayer,” let’s keep in mind the fact portrayed above in giving as a percentage of GDP is hugely dependent upon the economic climate.

See for yourself in the chart below: Digging a bit deeper the economic climate is perhaps most affected in particular by the stock market here in the United States. The nearly identical graph lines illustrated below in the chart comparing philanthropic giving and the Standard and Poor’s 500 Index further support this factor. Nearly one third of all giving in this country is to religious causes as shown below. In addition, paying attention to the immense success in fundraising via exploring the techniques of religious fundraising might be quite worthwhile…

This represented the largest year over year increase of any category of the report! This is significant for all fundraisers to note since this truly is representative of the large growth in foundation creation and assets.

This group is far outpacing charitable bequests and corporate giving and is closing the gap in small increments with personal giving.

This is still a fair amount of size difference as the chart below illustrates: When combined with individual and family charitable gift funds at community foundations and commercial brokerage houses like Fidelity and Schwab the opportunity for vast increases in giving arises in the upcoming decade!

I purposely saved this key finding or metric until last since numerous nonprofit sector experts and researchers have embraced this particular statistic as the true barometer to measuring improvement in fundraising techniques and practices.

In the press release Giving Institute Chair Jeffery Bryne points out the splendid fact that growth in giving as outpaced the GDP growth with a five-year average growth of 3.6% compared to 2%.

Unfortunately, this served only to bring the chart below back to its historical average percentage of 2%, give or take a tenth or so either way over the last 15 years. Just like the percentage of disposable income outlined in our first key finding above, we must strive to double this rather than just keeping pace.

As a long-term participant and technology provider to the nonprofit sector, I truly am optimistic that can be the case in the future.

How did my top five key findings compare to yours? Let me know in the comments below!