I have been intimately involved in a new CEO selection process on three different occasions during my tenures as a nonprofit board member at over a dozen different charities.

All three of these widely recognized and respected nonprofits had strategic plans in place, but in only one case did the plan include a section devoted to leadership succession planning.

The succession planning section discussed a plan to hire COO who could be groomed for the CEO role over a two-year period.  In my opinion, the plan was well thought out and made sense for this organization since the current CEO had been in place for more than twenty years and was nearing retirement.

Unfortunately, the succession plan was never enacted upon.

Why is there so often a lack of action?

Sometimes it is to save current budget dollars. However, this is shortsighted because finding a top notch CEO on short notice usually entails a substantial recruiting fee, as well as recruiting travel costs and moving expenses if the appropriate replacement can only be found out of town.

In addition, to the above non-trivial expenses, there are often lost dollars in fundraising and other areas during the time the role remains open. In the case mentioned above, all of those dollars far overshadowed the dollars supposedly saved by not hiring the COO to be groomed.

Does either of the two scenarios above sound familiar to you and your charity?

Succession planning should be in place for every key leadership role at your nonprofit. There is no way to sugar coat this bit of advice. Here are four easy steps that you can take to get started:

1. Make it part of you performance reviews of your current team.

Whether your reviews are annual or semi-annual (better) or quarterly (best), you can simply denote and discuss if appropriate if this individual has the capabilities for higher responsibilities in the future.

A simple rating system or chart (see below) can be put into place showing team members who are capable of a move upward now, in a year or two or further down the road.  Such a rating should also note if they are ready for a single step up (may all that is needed for a small charity) or for two or more steps up (usually only in larger charities). 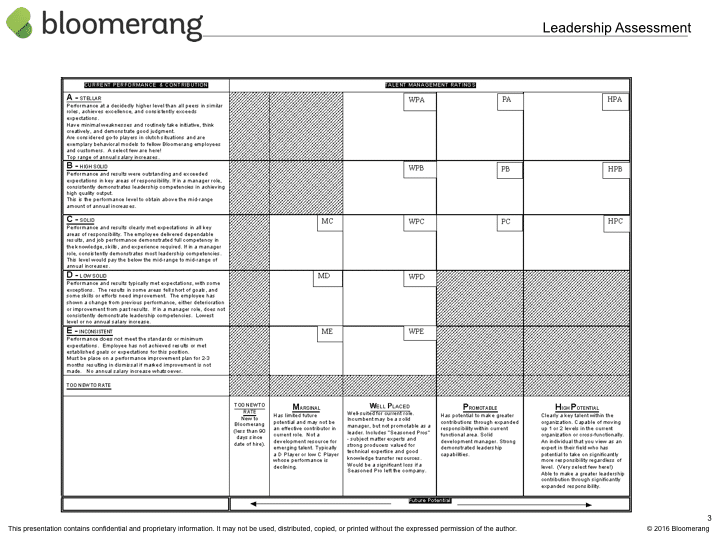 The chart above is what we use at Bloomerang and what I have provided for a few charities to utilize.  By doing this type of analysis for your entire team, potential leaders rapidly emerge who should be part of any succession planning discussion.

Those key individuals showing potential senior leadership capability should be provided with extra training and mentoring https://bloomerang.co/blog/fundraising-mentoring-a-lost-art/ whenever possible.

2. If there are not candidates being identified within your organization, consider adding the additional skills to the job description for any current openings in key areas where succession planning is needed.

There is no better time to spend a bit more in salary to hire an over qualified candidate for a role with the idea in mind to see if they can be groomed for much more than the current position.  (One wonderful side benefit is that this person will often totally revolutionize the first role they are hired for!)

Keep in mind you should not guarantee a higher role, just discuss the possibility, if needed during the interview process, to hire them.  You can then, after they are successful in their current role, begin to outline higher-level objectives and training for them.  Perhaps even mentoring under or shadowing with the person currently in the key role they might occupy in the future.

3. Your review process should also outline emergency backup or replacement talent from both within your current team and from the outside world (especially from related organizations) for any key roles.

The chart below is what we use at Bloomerang and once again what I have provided to a few charities to utilize. 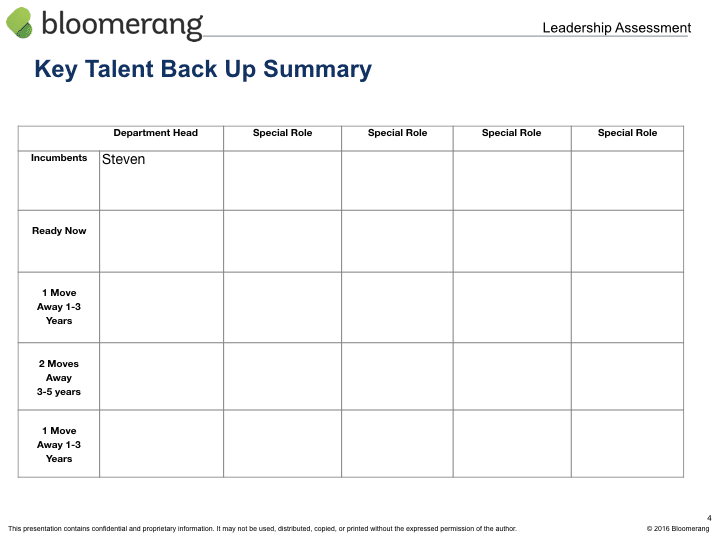 If such planning is done by your board and executive team alongside the annual review process succession planning is born!

4. If your Key Talent Back Up Summary does not have all of the needed boxes filled in at least partially then you will need one more chart to aid in identifying the positions or roles needing potential individuals with the talent required.

The chart below is once again the one we use at Bloomerang to aid in this search. (This is a bit of a crime and can be avoided be these few extra steps in your employee review processes!)

Should you not be able to identify from within the right individuals for the Talent Backup Summary the chart above also serves as the first step in identifying potential hires from outside your organization.

Over the years, I have found the following sources to be worthwhile to look into for such talent:


The four simple steps outlined above are merely extensions of your employee review processes. Nearly every nonprofit organization has such review processes already in place.

Adding in the three planning and organization charts picture above, provide your team with a proven method, to not only add the critical component of Leadership Succession Planning, but to also bolster the employee review mechanisms.

Such Leadership Succession Planning is then in place to serve alongside such other critical tools as your strategic plan, marketing plan and fundraising plan.