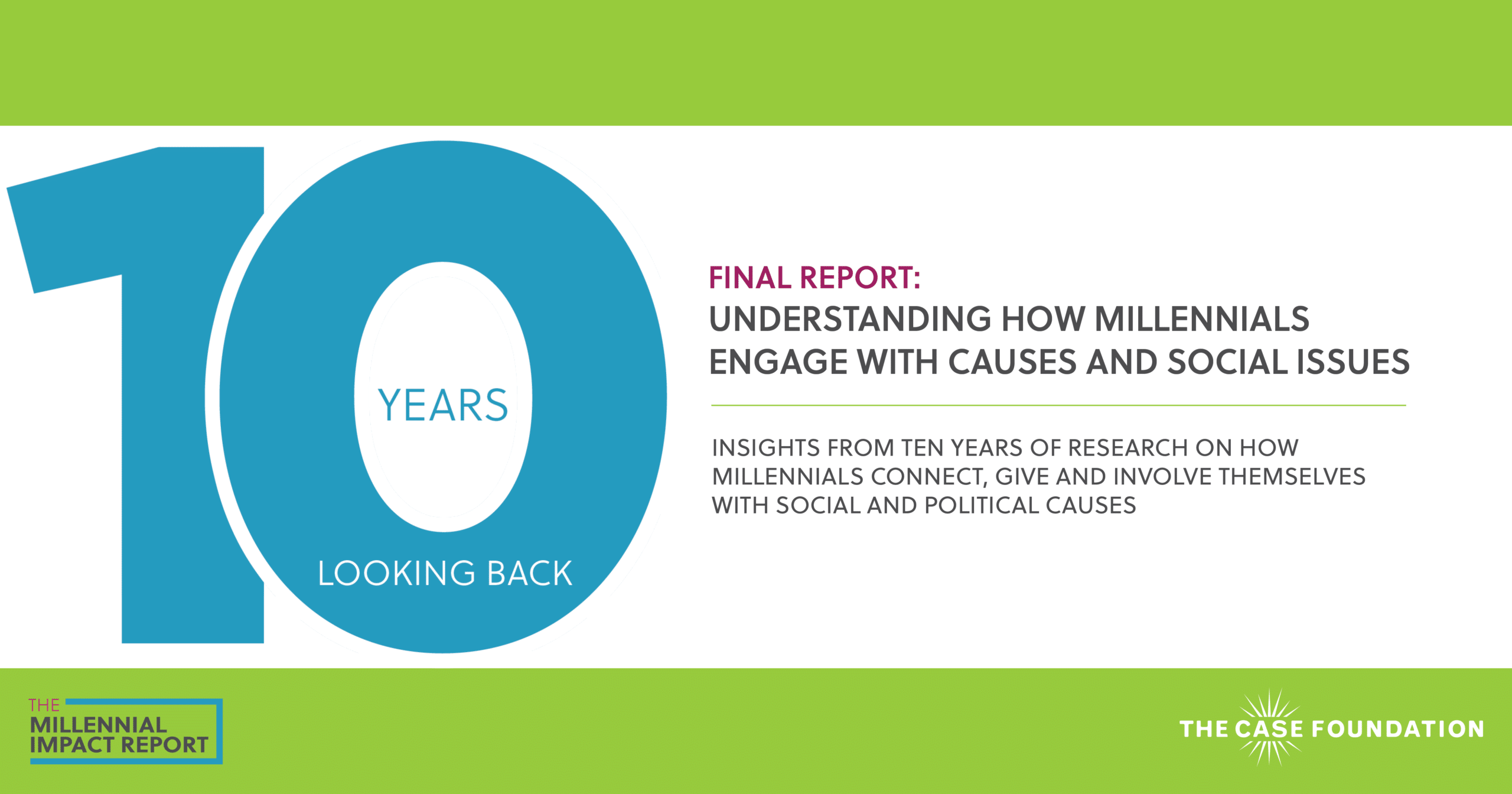 We’ve been following the excellent research of Derrick Feldmann and Achieve into how millennials connect, give and involve themselves with social and political causes

Achieve, with the help of their sponsor the Case Foundation, has released its final Millennial Impact Report: 10 Years Looking Back which shares insights into over a decade of research.

More than 150,000 millennials were studied throughout the decade leading researchers to identify ten traits characterizing young people’s approaches to cause engagement. Millennials are a societal force that today comprise the largest segment of the workforce. The report explores how this generation – 80 million strong – is doing good, how they have impacted the way good is done, and the consequences for ignoring their powerful influence.

Here are the 10 traits that were uncovered:

1. Millennials are Everyday Changemakers – they exhibit social good in small acts they perform every day: making an impulsive point-of-sale donation, bidding in an online charity auction, getting their friends together for a bike ride for charity, purchasing a product that supports its indigenous maker or from a company that shares its profits to help fill a need (or avoiding one that doesn’t) and making socially responsible investments designed to bring about a social good the investor supports.

2. Millennials Believe in Activism – In 2017, voting topped the list of the most actions taken by millennials and the action they deemed most likely to be influential; 71% consider voting as activism. Self-identified activists were more likely to contact their representatives and/or take part in marches/rallies than to use social media for cause support.

3. Millennials Care About Social Issues – Civil rights/racial discrimination, healthcare (for themselves and their aging parents and grandparents), education and employment are the causes millennials in this country consistently care the most about. As we have witnessed with such movements as #BlackLivesMatter and the Women’s March, millennials are willing to be active about issues that affect them directly. At the same time, however, they engage on behalf of people who cannot speak for themselves. To a degree not seen in any previous generation, millennials see themselves in the shoes of others who don’t look like them, speak the same language, have the same education or come from the same background, perhaps because of their high level of diversity.

4. Millennials are Passionate About Issues, Not Institutions – If passion for an issue drives millennials to get involved, trust keeps them true to an institution addressing their issue. More than 90% said they would stop giving to an organization if they began distrusting it. In a reflection of that trust, more than three-fourths would stop giving if they aren’t told how their contributions help.

5. Millennials Value Collective Action and Networks – Education has remained a priority for millennials throughout the decade – not just college affordability, but the quality of elementary education, too. But in the last couple of years, millennials have found their collective voice and used it to address other social ills. By 2017, education was joined by the headline issues of civil rights/racial discrimination, employment/job creation, healthcare reform and climate change (with immigration close behind) as priorities.

6. Millennials support the Greater Good, Not Partisan Politicking – Millennials expressed no trust at all in the government’s ability to address key social issues like poverty (33%), race and culture (32%), and student loans (30%). Millennials are also impatient with bipartisanship and politicking – a major reason they are developing their own ways to inspire and affect public policy change.

7. Millennials are Sector Agnostic –  As everyday do-gooders, millennials can be inspired to engage by point-of-sale requests for donations to food banks, by a peer’s request to join a fundraising team, by a suggestion they buy only from socially responsible brands, etc. They consider a company’s cause record when applying for employment, and they participate in employee giving campaigns based on the cause rather than the employer. Despite their mistrust in government and their belief that the country is headed in the wrong direction, they still willingly contact their political representatives and vote.

8. Millennials Take an Innovative Approach to Creating Change – Whatever ways millennials show their support for a cause, 81% are confident that those actions will lead to improvements. In interviews conducted for this report, interviewees indicated a belief that this generation’s aggregate engagement is already making an impact.

9. Millennials Believe All Actions Matter – Big and Small – Millennials have engaged in causes back and forth across a spectrum – some remain at the micro-level of involvement, some move to leadership roles and many move within the space in between. One significant, unique notion supported by 10 years of research is that millennials acting in small ways individually often create leverage as a large, active group capable of influencing great change.

10. Millennials are Influenced by Their Peers – A millennial is far more likely to become involved if their peers are already there. This influence has been evident throughout the decade of research. The chart below shows data that reflects a consistent preference for cause engagement with peers.

These findings provide important insights into the impact millennials are having on the nonprofit sector of society now and will have in the future.

Millennials are not just trying to change the world, they are actually changing the way that social change is made.